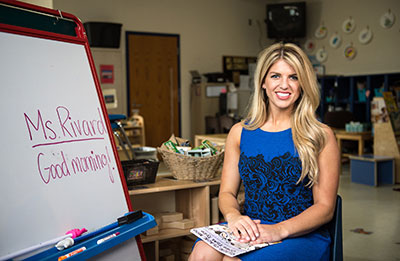 On the day Mallory Rivard‌ walked across the stage at Saginaw Valley State University's May 2017 commencement ceremonies, she already had one foot set in her future career: inspiring young minds as a classroom teacher.

After four years at SVSU, Rivard said that graduation was bittersweet. She doesn't plan to stray too far from home, though, after accepting a full-time teaching position at Bay City Public Schools.

"I've always had a passion for the Great Lakes Bay Region because I feel like I'm such a product of the system," she said. "I want to give back to that because this area has invested so much in me."

Having grown up in Bay City, Rivard was no stranger to SVSU. By the time she was a senior in high school, she knew that she would be making the transition from a Bay City Western Warrior to a Saginaw Valley Cardinal.

"I've had a really strong connection to this community and SVSU just felt like an extension of that," she said. "It was both a big campus feel and a small, hometown feel. Saginaw Valley has a very highly acknowledged education program and that's what I'm passionate about."

SVSU made Rivard's decision easy. Not only did she get to remain close to home and engaged with the community she loved, but she would get to do all of it while graduating debt free.

"The private scholarships that SVSU has afforded me have been tremendous," she said.

Long before she arrived at SVSU, Rivard knew she wanted to teach.

"When I was in third grade, my teacher at the time – Sharron Travis – always made me feel like she just wanted me to succeed, not only in the classroom, but outside of the classroom as well," Rivard explained. "It made me feel so good and I wanted to do that for other kids."

As a dual major in elementary education and early childhood education, Rivard has had many field-work experiences that have led to real world opportunities.

"At other universities, I know I wouldn't have had nearly as many opportunities as I've had here," she said. "SVSU has allowed me to create great networks with educators and administrators while giving me hands-on experience to know what the real world is like and knowing what real children in a classroom are like. That has really helped me become the young professional that I am today."

Rivard is also a member of the Kantzler Fellowship -- an SVSU service and learning initiative comprised of a select group of Bay County students. Through this fellowship, Rivard has worked closely with Bryan Crainer, SVSU's associate director of student life and leadership programs.

"I have relied on Mallory numerous times to serve as a mentor, a role model, and a leader to younger students coming from Bay County schools," Crainer said. "She always serves in that capacity with a grace and positive attitude that leaves those students feeling a sense of confidence and security."

"I had the pleasure of interviewing Mallory during her senior year of high school as part of her application for SVSU's Foundation Scholars Program," he said. "I remember telling Janna Kern, the former advisor of Foundation Scholars, that Mallory was the most polished and impressive high school student I had ever interacted with. That same level of professionalism followed her to SVSU and has, naturally, grown in her time here."

Rivard is among the most highly engaged students you will find, sharing her enthusiasm with a host of organizations. At SVSU, she served as the philanthropy chair for her sorority, Alpha Sigma Alpha, joined the SVSU cheerleading team as well as the National Society of Leadership and Success. Rivard served as an executive board member for Cardinals for Special Olympics; she was a co-founder and vice president of the Saginaw Valley Lions Club as well as an active participant in Alternative Breaks and the Order of Omega – a Greek life leadership organization.

Rivard also is an active participant in the Miss America organization. Not only does her participation help pay for school but it provides Rivard with endless volunteer opportunities. Through the organization, Rivard was previously named Miss Saginaw County.

"It was awesome," she said. "I felt like I was really representing my university."

Rivard currently holds the title of Miss South Central and she will compete for Miss Michigan this June.

As a student leader at SVSU, Rivard was also offered the opportunity to attend the National Conference for College Women Student Leaders in Washington D.C. last summer.

"I was one of two women selected from SVSU to go," she said. "There were motivational speakers and workshops but I also got to lobby in Congress on behalf of the American Association of University Women for a bill regarding student debt and how to refinance it."

From lobbying on national issues, Rivard's multifaceted education also extended internationally; she completed a study abroad trip to India over the summer of 2016. There, she spent four weeks teaching lessons to girls at the Kittur Rani Channamma Residential School for Girls.

"I was able to teach some science lessons there," she said. "It gave me the opportunity to see how their educational system was set up. I think my trip – travelling to India – was a huge highlight for me during my time at SVSU. I was so emotional when I was there. I don't know if it was because it was the culmination of my education or the fact that it was my first set of students. It was so real."

Rivard's enthusiasm for education came to her naturally. Since then, she has continued to work hard every day driving closer and closer to her goal of gaining employment as an educator in the Great Lakes Bay Region.

"This has always been the goal," she said. "I just want to teach."