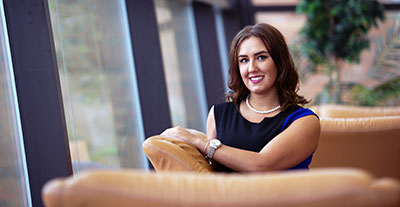 In her circle of friends, Madison Laskowski‌ admits she is the one most likely to trip over her own two feet, but she has proven she knows how to put her best foot forward when it comes to making legal arguments.

“I’m definitely the goofball of the group,” the Auburn native said, “but I’m ambitious.”

That ambition drove her to complete her bachelor’s degree in political science at Saginaw Valley State University in May 2017 – in just three years. That ambition helped her excel in a crowd of some of the nation’s most talented prospective lawyers. That ambition gained her a full scholarship to the Michigan State University College of Law, where she will begin her studies in the fall, on her way to becoming an attorney.

Laskowski's entered college with a passion for the law, and the support, encouragement and competitive opportunities she received at SVSU have her well prepared for a successful legal career, said Julie Keil, assistant professor of political science and mentor to Laskowski.

“Madison is a focused, determined young woman who has a clear idea of what she wants to do with her life,” Keil said.

Laskowski’s circle of friends partly consists of her teammates on SVSU’s undergraduate moot court program, which competes against other institutions in mock courtroom proceedings that draw from constitutional law and Supreme Court cases. Students act as attorneys in teams of two, making arguments to a panel of judges.

SVSU's program – in six short years – has risen to a top 20 national ranking; more than 350 colleges and universities compete in the American Moot Court Association. Keil is the founding adviser of SVSU's team and continues to serve in that capacity.

“It was an amazing moment,” Laskowski said of the point where she learned her team won after one of the five judges broke a split decision. “Things just really clicked and fell into place for us in Chicago.”

The victory sent her team to the American Moot Court Association’s national competition in Florida in January 2017.

“She has been the backbone of the program and one of our most successful students,” Keil said.

The national tournament performance in Florida capped Laskowski’s 2-year run on the moot court team and launched her toward the next chapter — law school — of a career her family long predicted she would pursue.

“My mom always told me I liked arguing,” Laskowski said. “Sometimes it was over my curfew, or what to pack for lunch. I was a spitfire, and so I figured I could eventually turn that into arguing for the law.”

During her sophomore year at SVSU, she met Keil. Laskowski said her development as a prospective lawyer was a work in progress, but thanks to Keil and the team’s support system, she improved quickly.

“I had horrible public speaking abilities that first year,” Laskowski said. “It was hard to fully grasp the Constitutional problems we faced, and to be able to articulate that in front of a panel of judges without fumbling over myself.”

The experience, though, allowed her to better understand her shortcomings and improve upon them by the time she returned to the team for her last year.

“My second year, I felt like I knew what to do,” she said. “The work ethic was there, the forensics skills were there and things just fell into place.”

Laskowski served as student president of the moot court program during the year when four SVSU teams — eight dedicated students in total, including Laskowski — qualified for the 2017 nationals. Only two colleges or universities — out of more than 350 nationally — qualified more students to attend the contest. In all, 80 teams with 160 students competed; Laskowski's team placed No. 49 overall.

“Traveling to the national like that, with some of your best friends, is one of the best experiences I’ve had at SVSU,” she said.