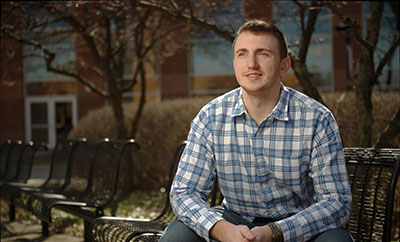 In the wake of the April 2015 Nepal earthquake, Jarrod Eaton felt the world shake beneath his feet. Literally and figuratively.

Literally, the Saginaw Valley State University student was on the ground in the Asian nation — helping those affected by an initial earthquake that registered a whopping 7.9 on the Richter scale — when an aftershock that registered 6.7 rattled his world.

Figuratively, those ongoing tremors and the resulting damage he witnessed inspired Eaton to solidify his commitment to develop as a servant leader and help people whose health is in peril, as he did for those in Nepal.

“We saw a lot of roads cut off from fallen buildings in these highly-populated cities, where people were in need and the likelihood of the spread of disease was increased because of their isolation,” said Eaton, the lone SVSU student who accompanied a team of faculty from the university in helping the Nepal aid efforts.

“People were really struggling to control the spread of diseases. That really sparked my interest in the study of the spreading of diseases.”

He coupled his ambition with passion that fueled a remarkable two-year finish to an already-notable SVSU undergraduate experience that included his election as president of the student government body, Student Association, in 2015.

Eaton earned his bachelor’s degree in health science in May 2017, and plans to carry that momentum with him this fall to the University of Michigan School of Public Health. There, he will pursue a master’s degree in global health epidemiology en route to a career studying the spread of diseases.

Eaton already has earned international praise for his work.

In March 2017, he presented research at the 2nd World Congress on Public Health and Nutrition in Rome, Italy.‌ Eaton discussed his study on the contributing factors surrounding influenza vaccination rate disparities among college-aged populations. His project was titled, “Vaccination of Influenza on College Campuses: A study to identify the correlation of determinants on influenza vaccination rate disparities.”

James Collins, Ph.D., SVSU executive-in-residence for health sciences, served as the faculty mentor and adviser for Eaton’s study. Collins said it was unusual for an undergraduate to be invited to present at such an international conference.  “Jarrod had to compete with people in the public health field with professional and advanced degrees,” Collins said. “He wrote a fine summary of his proposed research.”

If it was unusual for an undergraduate to be invited once to present at an international conference, it was almost unimaginable for that same student to be invited to a second international conference to present on a completely different topic. Less than a month after the Rome trip, Eaton flew to London, England for the Student Global Leadership Conference.

Alongside?Rene Hernandez, SVSU assistant professor of health sciences and one of the faculty members who joined him in Nepal, they discussed their relief work from two years earlier. The elapsed time has not dulled the images Eaton witnessed in the reeling nation.

“One of the hardest scenes was at a tent village we visited near the end of our week there,” he said. “We came across this girl whose school, we learned, had collapsed. Her friends and teachers had passed away. That was daunting to me; that these people lost everything. A lot of that was hard to grasp until I came back home.”

Before Nepal, Eaton had never traveled outside of the United States. SVSU provided the support that empowered him to travel across the ocean three times in the span of two years. The experiences helped him better appreciate his close relationships with professors, and the many opportunities SVSU offered him.

“My advice to students would be this: Never think you aren’t good enough to apply yourself, or that you aren’t experienced enough to engage in all the opportunities at SVSU,” Eaton said, “because maybe you are more qualified than you think you are.”