One shift.
That is all it took for Iridian Juarez to leave an impression in SVSU President Don Bachand’s office so strong that it led Mary Kowaleski, the president’s executive assistant, into a figurative tug-of-war for more of Juarez's time. 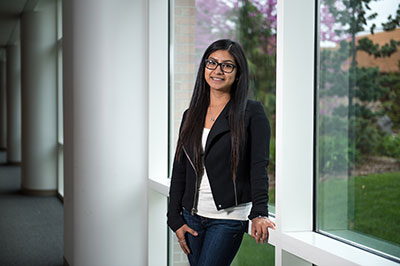 A social work major from Detroit, Juarez was working in SVSU’s Academic Affairs office when she filled a shift one day in Bachand's office. Shortly thereafter, Kowaleski was inquiring on how to get her back for more. A deal was struck where Juarez would split her time between Academic Affairs and Bachand’s office, where she communicated regularly with top university officials and other guests of the president.

“She has a lot of poise,” Kowaleski said. “She is always so extremely professional. She was so excellent with our guests.”

Juarez earned placement in those offices through her work ethic and connections through SVSU’s School and University Partnerships office. Roberto Garcia, a school improvement and transition specialist there, worked closely with Juarez in a variety of functions and watched her develop a skill set that was, in some ways, beyond her years.

“She goes above and beyond in everything that she does,” Garcia said. “I have never seen her operate in mediocrity.”

Juarez graduated from SVSU in May 2017 and will begin a career with Quicken Loans in Detroit. There, she will participate in a yearlong program where she will try out four different career types, including client care and mortgage banking.

“Then I’ll be placed in whatever position I like the best or did the best in,” she said.

Quicken Loans is not exactly the typical landing spot for social work majors, but Juarez pursued an internship there that her friends recommended. Her social work education proved beneficial as she listened in on customer service calls and helped ensure representatives were treating customers appropriately. She impressed her supervisors and soon found herself in charge of a team of fellow interns whom she taught what to look for during the calls.

Juarez could eventually move into a position more closely related to social work. Quicken’s human resources department, for instance, has a team dedicated to coordinating volunteer opportunities for staff members.

“I really like the company and their culture,” she said.

Juarez shares the same feelings about SVSU. She graduated from Cesar Chavez Academy High School in Detroit, which is one of SVSU’s 18 public school academies. Her involvement in activities there showed her that she wanted to be “completely immersed in the college experience,” she said. She considered attending college closer to home, but that also meant she may have missed out on extracurricular opportunities.

“I didn’t think I would have the opportunities at one of those colleges that I’ve had at SVSU,” Juarez said. “It was one of the best decisions I have ever made.”

Juarez’s recollection of her first days on SVSU’s campus is “just how much people cared.” The events and tours aimed at the incoming freshmen made her feel welcome, she said.

“All the schools closer to home really ever did was send an email, say orientation was mandatory, see you there. No extra effort,” Juarez said. “I could see how Saginaw Valley really cared about its students compared to other schools.”

A first-generation college student from a working-class family, Juarez received the benefit of SVSU’s Public School Academy Scholarship and the university’s Transition Program.

“It was a change coming to SVSU, being away from home,” Juarez said. “A lot of people struggle with workload; in high school, your parents might be telling you to do your homework. In college, you have friends and things going on that might distract you. You need somebody to help you stay accountable with your academic goals.”

Driven to help others, Juarez volunteered part of her time on campus with student organizations such as the Latino Awareness Association and Alternative Breaks, which sends students to volunteer across the U.S. during winter and spring breaks. She traveled with a group of students to Orlando, Florida, to assist A Gift for Teaching, an organization that gives school supplies to teachers who then distribute the supplies to their students in need.

“The teachers were really, really grateful that we were there,” Juarez said. “It made me think of my teachers in the past who used their own money for supplies and how much of a burden it was for them, but they still did it. It led me to appreciate what teachers do and the students who want to go into that profession.”

Juarez performed her fieldwork for the past two semesters through the Saginaw County Youth Protection Council’s Drug Education Center. She educated elementary students about the dangers of substance abuse.

The focus of those sessions differed based on the school. At Big Rock Elementary School in Chesaning, for example, Juarez spoke to students about tobacco use.

“After the lesson, they would say, ‘I don’t want to use this. I didn’t know it was this bad,’” Juarez said. “Now they know what the consequences are. That means something, even if they’re young.”

Excited to begin her career at Quicken, Juarez’s ultimate ambition is to utilize her social work background in a transition program to help incoming freshmen stay in school and graduate. And she hopes to do so as a Cardinal.

“I would love to come back to work for SVSU,” she said.

Juarez worked as a transition coach under Garcia, who is continually impressed by her passion for helping students overcome the same obstacles she did.

“I think the world of her and her story,” Garcia said.