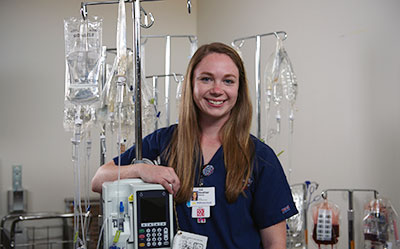 Inspired by a love of math and science, Saginaw Valley State University new alumna Heather Harvey decided on a nursing career when she was in high school.

"Nursing always seemed like the right fit," she said. "For me, the end goal would probably be a pediatric nurse because I've always loved kids. My mom runs a daycare out of her house so I grew up with kids. I was always just surrounded by them."

A native of Galesburg, Harvey plans to stay in Michigan; she accepted a job as a registered nurse at Borgess Medical Center in Kalamazoo. She graduated from SVSU in May 2017.

After visiting a local college fair during her senior year of high school, Harvey encountered SVSU for the first time.

"I hadn't heard of SVSU before that night," Harvey said. "When my dad saw the table for SVSU and they told me I qualified for the President's Scholarship, I knew it was something I was going to have to look into."

Attracted initially by SVSU's excellent nursing program and scholarship opportunities, Harvey quickly found that SVSU felt like home and decided it was the place to bring her energy and optimism.

"It was the middle of winter when I first visited the campus, but it was great," she said. "I was lucky to receive that scholarship and lucky to be a direct admit into the nursing program."

Applications for the nursing program are typically submitted after a student has fulfilled their academic prerequisites. Harvey was one of a limited number of high school seniors admitted to the program prior to beginning classes at SVSU.

"After that, I was guaranteed a spot in the nursing program," she explained.

Through her clinical experiences, Harvey explored a nursing path she never anticipated.

"We have an internship and leadership semester where you get to work one-on-one with a nurse," she said.

"I was in the OB unit, which is labor and delivery. I never thought I would go into that department, but I really enjoyed it. In your last leadership semester, the goal is that by the end you are able to take your nurse's full patient load by yourself."

Harvey worked 12-hour night shifts on the weekends at MidMichigan Medical Center in Alma; she racked up more than 170 hours to fulfill her leadership requirements.

Harvey excelled academically, but she also found other avenues to express her enthusiasm. She served as a student representative for Peer Health Education, where she served on the wellness committee, encouraging fellow students to pursue healthy lifestyles. She was also actively involved in Forever Red, SVSU's student advancement organization, and served as the vice president of Enhance – one of the three pillars that make up Forever Red's mission.

"Forever Red really helped me develop into the person I am while developing my leadership skills along the way," she said.

The organization proved the perfect fit for Harvey to fully unleash her talents and influence change in meaningful and lasting ways. She co-founded an initiative called "I Heart SV Week," which started in 2016 as a weeklong event dedicated to the importance of giving back to SVSU and educating students.

"It's about student scholarships and Red Pride," Harvey explained. "Forever Red has decided to keep it going and I'm excited to see where they take it."

Bryan Crainer, SVSU's associate dean of student life and leadership programs, advises Forever Red and worked closely with Harvey during her time in the program.

"In the last couple of years, I have been witness to tremendous growth in Heather's leadership abilities," Crainer said. "Whether it came in the form of serving on the board of directors for Forever Red, chairing committees, planning and facilitation on large-scale, campus-wide programs, or leading a team of her peers in her role as intramural sports coordinator, she leads with purpose and passion."

Harvey was recently given the opportunity to speak at an appreciation luncheon for SVSU donors hosted by the SVSU Foundation.

"As the chairperson for 'I Heart SV Week,' Heather was able to express her strong feelings about giving to SVSU from a student's perspective," Crainer said. "That message was powerful and motivating."

Alongside her active involvement within student organizations, Harvey also held two jobs at SVSU: working as a mentor in the nursing simulation lab, and as the intramural coordinator for Campus Recreation. She also taught a fitness class at the Ryder Center called Body Sculpt.

Harvey engaged in additional volunteer service, as well, participating in Alternative Breaks, a student-run organization that sends its members to different locations across the U.S. to participate in a range of service projects over regular school break periods.

"We went to Savannah, Tennessee for the trip, which was really fun," she said. "We were there to help with abused and abandoned animals to aid in rehabilitating them. I'm happy I had the opportunity to be a part of it."

After four full years of inspiring others and finding her inspiration, Harvey is eager to embrace her career aspirations and continue to care for others.

"I'm excited to see where I go from here," she said.