‌Less than a year after a roadway crash claimed his left leg — and nearly his life — Alex Fullerton was where he belonged: back at full speed behind the wheel of an Indy-style car he helped build. His perseverance comes naturally. 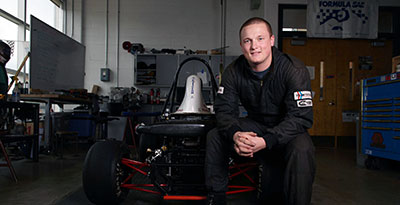 Fullerton passed a finish line of sorts in May 2017 when he graduated from Saginaw Valley State University with a bachelor’s degree in mechanical engineering. The feat was one of several accomplishments the Onaway native earned since the lure of a collegiate race car program convinced him to enroll at the university in fall 2012.

The road that led to that point, though, started about one year earlier when his grandfather enticed Fullerton to help with a full-frame restoration of a 1970 Chevrolet Chevelle.

“It was in a jillion pieces in my parents’ garage,” he said. “We were basically patching rust. I just really enjoyed hanging out with my grandpa all summer.”

The experience provided Fullerton with a taste of life as an engineer. Fast forward about one year: Fullerton, attending an orientation session at SVSU, where he initially signed up as an exercise science major, watched a presentation by the adviser for the university’s Indy-style competitive race team. Brooks Byam, professor of mechanical engineering, was detailing the successful history of SVSU’s Cardinal Formula Racing program.

“My hand shot up,” Fullerton said. “I asked, ‘What class do I have to take to be on the race team?’ He said, ‘In order to work on this race car, you want to be an engineer.’”

Byam gave Fullerton a tour of the Carmona Family Performance Racing Lab where SVSU students had built some of the world’s fastest Indy-style vehicles to appear in collegiate competitions.

“I was hooked,” Fullerton said. “The rest is history.”

He spent his freshman year largely learning the ropes from the team’s more experienced student engineers. His sophomore season, Fullerton helped lead the members of the team focused on the vehicle’s suspension system.

In June 2014 — about one month after the team finished first in the acceleration category for having the fastest college race car in the annual Formula Society of Automotive Engineers Collegiate Design Series competition in Brooklyn, Michigan — Fullerton was driving his motorcycle on a ramp merging Interstate 75 with U.S. 10 when he hit a pothole. The impact sent him sideways, crashing into double-bottom tractor trailer.

Byam, who described Fullerton as a “tough-minded” student, visited him in a trauma center following the crash.

“His whole family was there, looking distraught,” Byam recalled. “He was bright and smiling, and joking around. Nothing surprises me anymore with that kid. He loves to be challenged.”

The crash nearly severed Fullerton’s leg below his knee. After doctors attempted to save the appendage, he was presented with an option: Endure months and months of surgical procedures that may allow him to keep his leg, or amputate.

“It was a no-brainer decision for me,” he said. “I told them to amputate.”

But Fullerton made a request to his doctors: that he could drive again. And, after receiving his first prosthetic leg in November 2015, Fullerton was back in SVSU’s hallways and working with the Cardinal Formula Racing team. He helped test-drive the car less than six months later.

“It felt great,” he said of the experience.

Being a member of that year’s team also was especially fulfilling. The group’s car placed 26th among the 110 institutions competing. The finish was tops among the institutions without a graduate program in engineering. Fullerton and others involved with the team say the vehicle likely would have performed even better if not for the 10-cent oil line that broke during the competition.

“That was probably the best car that’s ever come out of SVSU,” Fullerton said. “It was elegant and designed very well.”

He remained on the Formula Racing team throughout his SVSU tenure, including this year, when he served largely as a mentor.

He accepted a full-time job as a systems integration engineer at Nexteer Automotive, starting in June 2017, although Fullerton has worked at the automotive manufacturer for months through a co-op program set up by SVSU’s Career Services.

His dream job involves working for a competitive racing team in NASCAR or another league.

“Racing is where I want to be,” he said.

Fullerton said he is thankful for the opportunities SVSU presented him, even as he struggled to overcome the physical challenges he faced outside of the classroom and body shop.

“Maybe I got lucky to fall into this,” he said. “I did something right.”