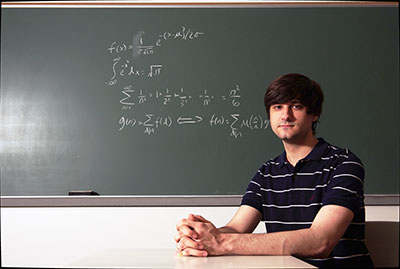 Alec Ward has a gift for solving math problems, and he wants to share that talent with others.

“No question, he has been one of our best students ever,” said Amy Hlavacek, associate professor of mathematics. “He’s already great at teaching others math.”

And so it only makes sense to Hlavacek that her pupil from Almont would pursue a career empowering others to become strong math students.

Graduating with a bachelor’s degree in May 2017, Ward served as a math tutor in SVSU’s Center for Academic Achievement, working with students in a subject area that can cause anxiety and frustration for some.

Hlavacek quickly noticed Ward's aptitude when he would point out errors in math problems.

Ward discovered his mathematical ambitions during his senior year at Almont High School, where his analytical abilities blossomed in a calculus class.

“It was definitely the subject I found easiest,” he said.

With plans to become an actuary, Ward enrolled at SVSU, but by his junior year, he realized he wanted to seek a career as a professor of mathematics. His tutoring work with students in the Center for Academic Achievement showed him students found him approachable, and he found himself inspired him to pursue an academic career.

Hlavacek, for one, is excited by the prospect of one day calling Ward a peer.

“He’s very quiet, patient and nonjudgmental,” she said. “He will sit with a student for as long as it takes. He very clearly explains things. His whole personality is suited for academia.”

In March, Ward had the opportunity to explain an academic paper at the Annual Meeting of Michigan Section of Mathematical Association of America at Ferris State University. The event largely featured professors. His paper was titled, "How a parabola can be a Source of Difference Equations."

“It was a good experience,” Ward said. “I had never talked in front of that many professional mathematicians before.”

Ward will meet more professional mathematicians soon. After considering several graduate schools, he will begin classes in a Ph.D. program for mathematics at Indiana University Bloomington in August.

With his next destination in sight, Ward said he remains appreciative of his relationships at SVSU, where faculty and staff provided him an opportunity to flourish.

“It was a very positive atmosphere,” he said. “I had a positive experience with every professor.”

Now Ward hopes to replicate that experience for others.

“He’s just operating on such a higher level,” Hlavacek said.