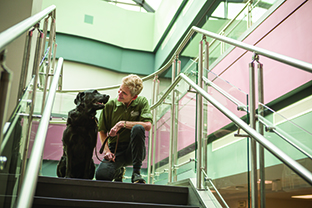 It’s mid-afternoon in early December and the Baltimore airport is abuzz with travelers as a chorus of conversations, gate announcements, and clicking suitcase wheels fill the air.

Aura sits attentively and takes it all in. Part golden retriever, part lab, she is here on assignment to carry out the same vital mission she’s been asked to carry out every day for the last two years:

A specially-trained hearing dog, Aura acts as the ears for SVSU alumna Gretchen Evans, an Army veteran wounded in Afghanistan in 2006. While serving a tour in Kabul, Evans’ unit took fire and a mortar explosion just 10 yards away left her deaf and suffering from a traumatic brain injury. Just like that, a decorated 27-year military career came to an end and Evans was left trying to adjust to a silent civilian life.

That adjustment has come in the form of helping other veterans like herself. On this day, Evans is travelling to New York to speak on behalf of America’s VetDogs. The non-profit organization, which provides wounded veterans with service dogs, teamed Aura with Evans in January 2015. Now Evans sits on its board and travels the country with Aura, championing their cause and fulfilling a passion to help America’s wounded warriors.

It’s a passion that, in many ways, began at SVSU.

Of all the reasons to choose a university, it was a t-shirt that sold Evans on SVSU.

Her husband, Robert Evans, became chief chaplain of the Aleda E. Lutz VA Medical Center in Saginaw and when they moved to the area she began looking for a place to continue her education. As a wounded veteran, the military would pay 100 percent of her tuition and she considered a number of area institutions. When she came to campus for a tour, the Admissions representative promptly gave both her and her husband some Cardinal swag. It was a personal touch that made Gretchen Evans feel at home. A life of military service provides many rewards, but one thing it does not offer is geographical stability. So when she ultimately decided to enroll at SVSU, it was the eighth university she’d attended.

“I could have gone anywhere I wanted to,” she said, “but when they gave my husband a shirt, too, I just felt like this was the place for me. That simple act of caring and kindness sealed the deal.”

Soon Evans connected with Career Services Director Mike Major — who recently formed the Cardinal Military Association for Veterans — as well as now-retired Dean of Students Merry Jo Brandimore. Together, they discussed navigating university life as a veteran, and Evans expressed interest in helping provide more and better services to fellow military-affiliated students. When Brandimore received approval from the Veterans Administration to employ two veteran work studies in her office, Evans got one of the jobs.

The work by Evans and Brandimore laid the foundation for what would eventually become the Military Student Affairs Office, founded in part by Denise Berry, who stepped down as director in 2016. SVSU was recognized by Military Times as part of its Best for Vets: Colleges 2017 Rankings. SVSU was ranked No. 34 among 130 four-year institutions across the country.

“Individuals who have spent time in military service have different issues in transitioning to college life compared to other students,” Brandimore said.

“I hope that the Office of Military Student Affairs is the one place our military students can go where someone understands the perspective of a student who has come from a military framework. Gretchen understands that and she always gave her all for these students because she felt every one of them was deserving of our best.”

Evans helped military students navigate everything from financial aid to classroom life, and in doing so, discovered a passion for serving her country in a new way: by helping its veterans.

“Working with military students was part of my healing process, too,” Evans said. “My whole adult life, I was in the military and I didn’t know anything else. It was healing for me to be able to give back and navigate a new life that I had been dealt.”

Evans was dealt another curveball when her husband was offered a job transfer as she was preparing to finish her degree. Determined to graduate, she stayed in Saginaw while her husband relocated. When their house sold, Evans moved on campus so she could finish her bachelor’s degree in sociology. At 54 years of age, she was the newest University Village resident. Evans graduated in May 2013.

“I can’t even articulate what it meant to graduate from SVSU,” Evans said. “I really felt like it was meant to be. My experience at SVSU was so phenomenal as both an adult student and also a wounded warrior. After 35 years and 40 countries, I finally had that diploma.”

And it almost never came to be.

Evans’ military career began, in some ways, because of college. In 1978, she enrolled at Texas Tech University in Lubbock, Texas, and later at Austin College in Austin. She was paying for school all by herself and so she decided to enlist in the military. Her plan was to serve four years and leave with the G.I. Bill to pay for school. Instead, she fell in love with being in the Army and made a 28-year career of it.

“Every time I stood before my fellow soldiers I felt humbled and honored to be among them,” Evans said. “They inspired me to be the best leader, soldier and person I could be.”

Throughout her time in the military, Evans earned every rank from private E1 to E9, the highest rank for an enlisted member. Her last duty assignment was in Kabul, Afghanistan, where she served as the Garrison Command Sergeant Major.

On Feb. 27, 2006, her unit began taking mortar fire at the forward operating base. She was standing out, yelling for everyone to get into the bunkers when the mortar that took her hearing hit to her right and blew her off her feet.

“I looked down to see if I had arms and legs,” she said. “I had an incredible headache and I couldn’t hear, but I didn’t realize I was permanently deaf until the doctors told me. You don’t realize how devastating it is to be able to hear your whole life and then suddenly not be able to anymore.”

She returned stateside, finished her rehabilitation and retired from the Army. An avid runner, Evans was jogging one day when a bicyclist ran into her trying to pass. He yelled to her that he was passing, but she couldn’t hear him coming up. Concerned for her safety, her doctors determined getting a safety dog would be in her best interest.

That’s when she met Aura.

Aura helps Evans by responding to sounds, alerting her with a poke in the leg if she hears anything from a ringing phone to a knock on the door. Aura can also tell the difference between noises like an oven timer or fire alarm so Evans knows if there’s an emergency. Aura even alerts her to potential dangers while driving and will turn her head quickly if she hears a car horn.

Evans said Aura also helps by alerting others she is deaf. Since Evans has what is known as an invisible injury, people she meets for the first time don’t realize she can’t hear them. She has grown adept at reading lips; but, if she can’t see the person who is talking, she doesn’t realize they are speaking to her. Having Aura by her side helps people recognize something is different. Aura also serves as a conversation starter, as people will focus more on Aura than Evans’ injury.

“She keeps me safe and serves as an ambassador to the world for me,” Evans said. “She’s my family.”

The TODAY Show featured Evans and Aura recently during a segment as part of their Puppies with a Purpose series that focuses on its partnership with America’s VetDogs. The segment highlights several veterans who, like Evans, have benefited from the companionship and assistance of a service dog.

“I knew my country was going to take care of me,” Evans said. “And Aura has given back so much of what was
taken away.”