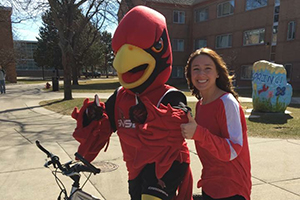 A group of Saginaw Valley State University students will collaborate with a local bicycle-riding organization for a community-minded cause.

After coordinating with SVSU students, members of Saginaw’s Counter Cruise, a group that hosts leisurely rides largely in the City of Saginaw, will switch venues to SVSU’s Kochville Township-based campus during an 8-mile, 1-hour trek Sunday, April 9, beginning at 2 p.m.

In addition to navigating SVSU and its surrounding neighborhoods, participants are encouraged to bring non-perishable food items that will be donated to Hidden Harvest, a Saginaw-based non-profit that helps to feed the hungry in the Great Lakes Bay Region.

“This was a great way to connect SVSU with two charities in Saginaw,” said Natalie Schneider, a Saginaw Township native and one of the students helping to organize the effort. “We want to give back to the community.”

Schneider, a business management major, is a member of The Roberts Fellowship Program, a student leadership development initiative at SVSU. Schneider and four other members of the group — as part of their participation in the program — are helping to organize the charity-driven bike ride with Counter Cruise. Participation is free of charge.

Schneider is familiar with both Counter Cruise and Hidden Harvest. Last summer, she participated in several Counter Cruise bike rides across Saginaw. A few of the rides involved picking up trash across the city.

“They do a lot of great things in the community,” Schneider said of Counter Cruise. “I wanted to find a way to get them involved with the university in some way.”

Last fall, Schneider was also involved in SVSU’s Battle of the Valleys fundraising competition with Grand Valley State University. The effort led to the university raising $26,000 for Hidden Harvest. The nonprofit’s organizers planned to use the funds to support their mission of supplying Great Lakes Bay food pantries while also developing a partnership with the Diaper Alliance, a Midland-based nonprofit that provides diapers to families in need.

Schneider said the April 9 bicycle trek will launch from SVSU’s Lot K parking lot, adjacent to the Ryder Center. There, students will collect the food donations before or after the bicycle ride.

In the event of bad weather, participants can meet at the same time and place on Saturday, April 23.