Before volunteers signed up to help during the FIRST Robotics statewide competition at SVSU, Carolyn Wierda had a decision to make: How many T-shirts to order for those anticipated helpers.

Wierda requested an order of 400, thinking there was a good chance she would have a surplus of 100 after the event.

Instead, she came up 25 shirts shy.

“We were hoping for 300 volunteers,” said Wierda, the STEM@SVSU executive director as well as volunteer coordinator for the FIRST Robotics event. “So, to get 425 people offering to help, that was a remarkable statement made by our students, staff and faculty.”

What added to the remarkable nature of FIRST Robotics was the short amount of time Wierda was afforded to organize a large-scale volunteer effort for an event that was expected to — and did — bring 7,000 visitors from across the state to the Ryder Center.

“I’m not sure we’ve ever had a volunteer effort of that magnitude,” she said. “It was a challenge, and people stepped up.” 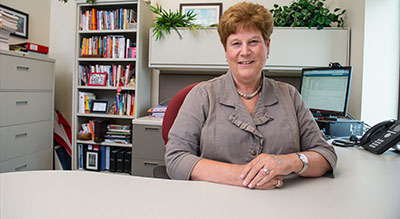 The outpouring of support was a testament to one of SVSU’s defining characteristics: its hospitality.

“The people who visited were able to see how beautiful our campus is, how modern our facilities are, and how welcoming we are,” Wierda said. “This event brought together people to an event that really emphasized what we have to offer.”

Outside of those personable offerings, FIRST Robotics also helped highlight another SVSU strength Wierda understands well: its STEM programs. High school students and parents were exposed to the university’s faculty and students, along with the many STEM-based programs at SVSU.

Wierda has served as executive director of STEM@SVSU since January 2015. Since then, she has worked to build upon — and market — the STEM programs already underway at the university. Those initiatives extend beyond courses and classrooms for undergraduates, and include initiatives geared toward improving K-12 student interest in the sciences.

“There are so many people here and in our community who are doing tremendous things for STEM,” she said.

“With the relationships SVSU has with local businesses and the Great Lakes Bay Regional Alliance, there are many more opportunities that could come our way. I’m just one person. There are a lot of people who are helping to make this happen.”

“That has brought a number of opportunities for our university,” she said. “We’re really doing everything we can to improve STEM education in the state of Michigan.”