For being too much of a distraction in seventh grade, Sylvia Fromherz was asked to spend the rest of class sitting outside in her Catholic school’s atrium. It was a beautiful spring day in Orego. The teacher’s decision hardly felt like a punishment.

It wasn’t the serenity of the setting that stands out about the experience to Fromherz now, years later. Instead, that day became a watershed moment in her life when Fromherz discovered the orb weaver spider sharing space with her in that atrium.

“I watched it as it built such an intricate, geometrically-precise web,” she recalled. “It was the most fascinating thing I had ever seen.”

That moment of biological beauty launched Fromherz on an academic path that led to her position today at SVSU.

“It’s been an unlikely journey,” the assistant professor of biology said. 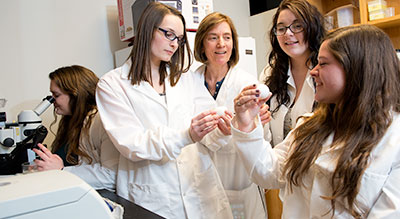 Fromherz grew up one of 11 children on a dairy farm straddling the Oregon coast. Aside from the Catholic community, there was little contact with the outside world. Rare TV allowances afforded her exposure to nature-themed shows with hosts such as Jacques Cousteau. Some of her earliest reading material were decades-outdated science books purchased for pennies from local auctions.

Her love for science inspired a high school teacher to educate Fromherz on what he had learned while earning a college degree in forestry and oceanography. Later, a field trip to Oregon State University — the only college Fromherz had gazed up to that point in her life — convinced her to pursue her passion in a postsecondary setting.

She went on to earn a bachelor’s in marine biology at that same institution and, later, moved to the east coast to earn a Ph.D. in cell and molecular biology at Brandeis University. In between, she spent two years at the Marine Biological Laboratory at Woods Hole, Massachusetts.

She has remained involved in higher education ever since, transitioning from student to a research-driven educator intent on empowering students who share her passion for STEM.

When Fromherz joined SVSU in fall 2015, she continued a student-supported research project she began years earlier at another institution. She and her undergraduate students are studying sensorimotor development in the embryonic chick.

Her passion to promote STEM extends beyond specific research. In her classrooms, she uses active learning strategies and online enhancements such as recorded online lectures to help her students better connect with the science she began to love as early as childhood. The practice allows students to watch a recording of Fromherz teach biology on their computer screens from a cozy spot outdoors, near where the spiders sometimes weave their webs.