John Baesler was a boy in Bensheim, West Germany in the 1980s when his family — watching a crime drama on TV — heard a knock at the front door one evening. On the other side were two members of his family he met for the first time that night: His father’s niece and her daughter, who had arrived there after a daring escape from then-Communist-occupied East Germany.

“That was an amazing experience,” said Baesler, now an associate professor of history at Saginaw Valley State University. “They had escaped through Hungary and showed up at our door.”

Not long after that, the Berlin Wall came down in 1989 and the Cold War’s grip slipped loose. The two German nations reconciled. Families reunited without fear. The anxiety of those divided days went the way of history. 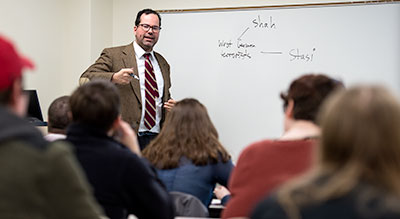 It’s that distancing history that Baesler chases today. With the help of his students, he is leading a research effort aimed at capturing the experience of living in West Germany during a Cold War that spanned four decades, including the 28-year existence of the Berlin Wall. For now, the project involves interviewing United States military veterans stationed near communities such as his hometown in Bensheim, just south of Frankfurt with a population of 40,000, although he may expand the work’s scope depending on his findings.

“I want to answer the question, ‘How did that everyday interaction with each other influence Germans and Americans, and how did that influence the Americans when they came back to America?,’” he said.

“There was an everyday diplomacy between Germans citizens and American soldiers. Especially in small German cities, that represented a major change in daily life.”

Baesler was witness to much of that cultural interplay. He remembers the weddings between American soldiers and German daughters. He listened to the U.S. Armed Forces’ radio stations. He saw their military vehicles traveling the streets. He enjoyed their food.

“Once a year, the Americans in our town had an open-door event, where they invited us in,” Baesler said. “They played really good music, and I remember eating marshmallows for the first time there. Germans didn’t have marshmallows.”

Already, Baesler and his students have heard stories from 14 veterans — recording their accounts on video, audio and paper — and he continues to search for more witnesses of that history.

“There are so many stories to tell, and I’m interested to hear them,” he said. “This is a labor of love for me.”