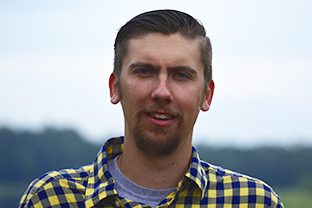 A Saginaw Valley State University alumnus and literary scholar will return to the institution this summer in part to study one of the later writings of 20th century poet and Saginaw native Theodore Roethke.

Brandon Rushton, 2012 SVSU graduate, recently was named the second recipient of the university’s Fredericks-Follett-Roethke Graduate Fellowship in the Arts & Humanities. The fellowship supports an individual’s visit each year to SVSU to study one of three collections housed on campus: Roethke, sculpture artist Marshall M. Fredericks, or British author Ken Follett.

Rushton will spend a month on campus beginning Monday, June 26, immersing himself in Roethke’s poetry and related material, with a particular focus on “North American Sequence,” a series of six poems published posthumously in the 1964 Roethke collection titled “The Far Field.”

“I’m hoping to discover the head space Roethke was in when he was writing ‘North American Sequence,’” Rushton said. “It was very different from the work he was doing up until that point in his life. I want to trace where that came from.”

Rushton, a Flint native who currently serves as a lecturer of English at the College of Charleston in South Carolina, said he first read Roethke in anthologies while studying at SVSU as a double major in creative writing and history.

Years later, Rushton gained a new appreciation for Roethke while reading his longform work in “North American Sequence,” which explores the author’s spirituality as he travels to locations spanning Michigan to the Pacific Northwest.

“I want to know why he turned to this long, expansive poem,” Rushton said. “It will be great to sift through the materials at SVSU in search of answers. It’s a wonderful opportunity.”

He also hopes to chart Roethke’s influence on other poets. Rushton plans to create a database highlighting the 13 recipients of the Roethke Memorial Poetry Prize — offered once every three years since 1968 — and include analyses on how Roethke may have influenced each authors’ work.

Rushton also plans to use his studies as inspiration for a manuscript of his own poetry.

Roethke, among Saginaw's most famous native sons, is considered one of the most influential American poets of the 20th century. His nine books of poetry and other writings earned him every major award available to an American poet, including two National Book Awards and the Pulitzer Prize. In 2005, Roethke's widow, Beatrice Roethke Lushington, enhanced the existing Theodore Roethke Collection at SVSU through the donation of her personal collection of first editions of her husband's work and ten books of literary criticism about Roethke.

Rushton's project follows last year’s study of Fredericks’ sculptures by the first recipient of the Fredericks-Follett-Roethke Graduate Fellowship in the Arts & Humanities, Nick Hartigan, who at the time was a fifth-year University of Michigan doctoral student specializing in 20th-century sculptures