Armed with federal funds, crews demolished 884 vacant homes in the city of Saginaw from 2013 to 2015. Two Saginaw Valley 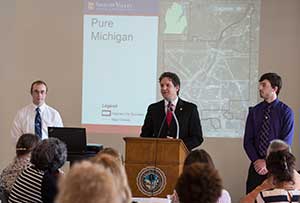 State University professors say those demolitions are directly linked to a significant reduction of serious crime in the city.

Andrew Miller, associate professor of geography at SVSU, Evelyn Ravuri, professor of geography, and multiple SVSU students studied the factors involved in the dramatic drop in crime in the Saginaw area. From 2010 to 2015, major crimes in the City of Saginaw dropped by 80 percent, and neighboring communities also saw crime go down. (See: SVSU analysis shows Saginaw has seen major gains in safety)

The demolitions were among the variables that had a “massive” effect, Miller said.

“Our research shows that the demolitions are responsible for 20 percent of the decrease in crime,” he said. “That’s a highly significant finding.”

While Miller’s previous work had shown a correlation between blight removal and crime reduction in Saginaw, quantifying how much of the reduction can be explained by the blight removal is a new finding. Crime rates dropped in the city, and in neighboring Bridgeport, Buena Vista, and Saginaw townships.

“I was not expecting the demolitions to have such a significant impact on crime rates,” Ravuri said.

Miller and Ravuri worked with the City of Saginaw, the Saginaw County Crime Prevention Initiative and other partners to collect data and conduct the research.

Tim Morales, Saginaw city manager, is grateful to have evidence that the demolitions were effective.

“Through our work with SVSU, the City has statistical evidence of the impact of blight removal and proactive policing in Saginaw,” he said. “Blight removal has improved our neighborhoods through reduction of abandoned and decaying structures, which has also produced a safer city.  Without the reduction of the blighted and abandoned buildings, I don’t think Saginaw would have experienced such a sharp decline in violent crime.”

As part of their community-based research, Miller and Ravuri also worked with local law enforcement to identify crime “hot spots” and “cold spots,” so that police can target their resources more effectively.

The SVSU research team used  Data-Driven Approaches to Crime and Traffic Safety (DDACTS) standards for analysis in accordance with Michigan State Police policies, to map the “hot spots” for crime for the 3 years prior to the demolitions (2010-2012), the demolition period (2013-early 2015) and the post-demolition period (early 2015-2016) to determine the effects the demolitions had upon the diffusion of crime in the greater Saginaw region from 2010-2016.

In 2010, the most serious crimes were highly concentrated within Saginaw city limits. Following demolitions funded through $11.2 million to Saginaw from the Michigan State Housing Development Authority, primarily via the federal Troubled Asset Relief Plan, criminal activity is more widely distributed.

“The demolitions drove crime out of Saginaw, and it dispersed evenly, for the most part,” Miller said, “That’s kind of what we’re looking for. If you’re in policing, you want a more even playing field that everyone can then play on and that every police agency, if working together, can all work together to deal with. Because then, it becomes a much more manageable problem.”

Miller and Ravuri plan to continue their research; they are currently examining whether the housing demolitions affected home prices in the Saginaw area. For them, a critical element of their work is sharing the findings with community leaders with the goal that recent safety gains persist.

“To redevelop urban areas,” Miller said, “you don’t want to just displace the crime and move it somewhere else and deal with the same problems in a different place. The idea is to create a better community, a better region, that works cohesively together. Based on what we’re seeing, Saginaw is making meaningful progress in this direction.”


In the photo, Andrew Miller, SVSU associate professor of geography, presents research showing blight removal in Saginaw has contributed a drop in crime in the city and its neighbors. Miller spoke at the Reinventing Saginaw symposium at the Bancroft building in downtown Saginaw May 26, 2015; new research shows the housing demolitions conducted from 2013 to 2015 are responsible for 20 percent of the overall drop in crime seen in the Saginaw community.