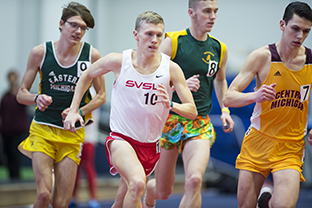 With exceptional discipline and inspired determination, Joey Southgate became an All-American athlete during a personal best-smashing, “storybook-ending” final run in May as a track athlete at Saginaw Valley State University.

By the end of this week, the Unionville native will begin applying that same discipline and determination toward his training as a nuclear engineer aboard a submarine with the U.S. Navy.

“It might be an unnerving feeling at first, being in a submarine like that,” Southgate said, “but this will be a really quality experience. I’m looking forward to it.”

The May 2017 SVSU graduate will depart Saturday, June 24, for Newport, Rhode Island. There, he will embark on a 12-week-long U.S. Navy Officer Candidate School — a “boot camp” of sorts — followed by two years of training in the Nuclear Propulsion Officer Candidate program. He plans to conclude his 5-year Navy commitment aboard a submarine, dedicating himself to managing and maintaining the nuclear reactor that keeps the vessel running and its men alive hundreds of feet beneath the surface of the seas.

Southgate has had his sights set on an engineering career for some time and said SVSU’s top-notch mechanical engineering program was a big factor in choosing his school.

“I’ve always liked the problem-solving aspect of engineering,” he said. “I enjoy math, and engineering has a lot to do with math.”

Once at SVSU, Southgate thrived in what he described as a “down-to-earth, personal, hands-on” experience that allowed him to work one-on-one with professors. One of his mentors was Brooks Byam, professor of mechanical engineering, who served as Southgate’s advisor during a senior capstone project that involved designing and building an indoor practice hitting platform for SVSU’s golf program.

“Joey has a good balance of technical and entrepreneurial skills that should serve him well in the military,” Byam said. “In the military, you also need good mental and physical toughness, and Joey showed that he has that as an athlete.”

He showcased that toughness in particular during his final competition as a Cardinal at the NCAA Division II Outdoor Track & Field Championships in Bradenton, Florida in May.

“It was kind of a storybook ending to my career,” the three-year team captain said.

For weeks, Southgate’s earlier performances placed him on the bubble of those athletes hoping to qualify for the championships. He eventually slipped in as the 19th of 19 athletes invited to compete.

Competing in the 10,000-meter run, Southgate approached the contest with a level of determination and confidence he hadn’t experienced previously, he said.

His mastery of that particular race had become a theme of his senior season campaign. A year earlier, his personal best finishing time was 30 minutes, 40 seconds. By the time he entered May’s contest, his latest best was 30 minutes, 2 seconds — a 38-second difference considered sizable for that distance.

But, on the biggest stage of his athletic life, Southgate was ready to finish even faster.

“Distance running is a very heavily mental sport,” he said. “A lot of people probably don’t appreciate the mental preparation that goes into it. I was in a good spot mentally that day.”

The result was a national championship performance that shaved 18 seconds off that personal best and nearly one minute off his top performance a year earlier. He finished in 29 minutes, 44 seconds, placing sixth in the race.

The distinction earned him a spot on the U.S. Track & Field and Cross Country Coaches Association First Team All-American lineup.

“I always wanted to be an All-American,” he said. “I thought, ‘That would be the pinnacle of my career,’ and it was.”

Southgate learned from a previous SVSU All-American, during his years as a student at Unionville-Sebewaing High School. There, he participated in competitive running sports under the mentorship of a member of SVSU’s Cardinal Athletic Hall of Fame, Ed LaBair, a seven-time All-American and member of two national championship indoor track and field teams while at SVSU in the early 1980s.

“He has been a big influence for me when it came to my running career,” Southgate said. “He has been a great leader and motivator for me.”

Now Southgate is determined to achieve excellence in his next challenge in life — this time, out at sea.

While he is the grandson and nephew of U.S. Navy veterans, he didn’t consider a life in the military until attending a career fair at SVSU in the winter semester of 2016, when a Navy recruiter connected Southgate’s interest in engineering to the Nuclear Propulsion Officer Candidate initiative.

“I kind of walked into this program by accident,” Southgate said.

His enrollment wasn’t as simple as “walking in,” however. Southgate engaged in a months-long application process that included meeting with Navy officials in Washington D.C. and visiting Naval Base San Diego. He was officially accepted into the nuclear propulsion program in July 2016.

During his trip to San Diego, he toured a submarine docked at the naval base. While the vehicle never submerged, “you could get a sense of how small and cramped it was inside,” he said.

“But it didn’t lose its appeal for me.”

Southgate said that appeal includes maintaining the discipline necessary to manage a nuclear reactor responsible for keeping dozens of men alive below water and a nation protected on the surface.