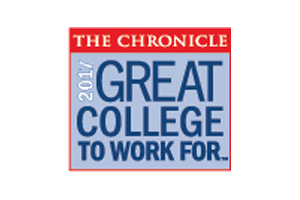 Saginaw Valley State University joined elite company when it was named one of the “Great Colleges to Work For” for the second consecutive year by The Chronicle of Higher Education, a top trade publication for colleges and universities.

The distinction was announced earlier this week when The Chronicle published its tenth annual report on The Academic Workplace. SVSU was among 79 higher education institutions — out of 232 institutions that applied — to achieve the honor this year. SVSU has applied for the recognition twice, earning the distinction both times. SVSU joins the University of Michigan as the state’s only universities to earn the distinction both years.

Don Bachand, SVSU’s president and a 39-year employee of the university, said SVSU’s continued recognition as an outstanding workplace was well-deserved.

“Throughout my time, our faculty and staff are committed to being approachable and empowering, and embrace a student-first philosophy,” Bachand said.

“Colleagues support one another in myriad ways, and the university supports them with resources. We listen to faculty and staff and improve our work environment based on their input; we invest in our people and their professional growth.”

SVSU was honored in four categories included in the survey: compensation and benefits; facilities, workspace and security; teaching environment; and tenure clarity and process. Last year, SVSU was recognized for the first three categories.

The questionnaires were administered online in March and April across SVSU, which employs more than 750 full-time faculty and staff members.

To administer the survey and analyze the results, The Chronicle worked with ModernThink LLC, a strategic human capital consulting firm that has conducted numerous “Best Places to Work” programs, surveying hundreds of thousands of employees nationwide.

This year’s project represented the tenth “Great Colleges to Work For” survey for The Chronicle of Higher Education. Richard K. Boyer, principal and managing partner, ModernThink LLC, said the surveys over the span of that decade indicated institutions are continuing to break down barriers that once prevented them from building stronger ties internally and with local communities.

“There’s simply no going back to the days when strict hierarchies, traditional top-down leadership, and ‘this is the way we’ve always done it’ thinking were the norms,” Boyer wrote in a report accompanying today’s survey announcement.

“If an institution wants to remain competitive in the competition for talent and be successful in its efforts to transform and innovate to ensure future success, now more than ever we must continue to break down barriers and build bridges to the futures we want.”

Great Colleges to Work For is one of the largest and most respected workplace-recognition programs in the nation. For more information and to view all the results of the survey, visit The Chronicle’s website at www.chronicle.com/interactives/greatcolleges17.