Few people are as responsible for how well your workday goes as Jason Rasmussen.

That’s because the SVSU management specialist has control over the temperatures of every room on campus, save for a few student housing suites.

The magnitude of this power isn’t lost upon the 52-year-old. It’s a responsibility he takes seriously — and with pride.

“I can tell you that the temperature in your room right now is 72 degrees,” Rasmussen, from his office in South Campus Complex A, tells this profile’s author, whose office is in Wickes Hall.

“There are some studies that say that’s the most comfortable temperature. I want people to be comfortable.” 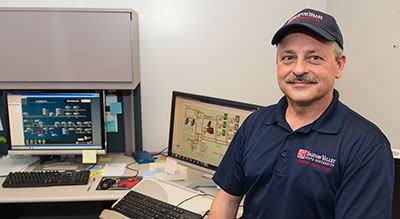 Establishing that comfort begins when Rasmussen boots up a pair of computers that host the software that sets temperature levels for most of the campus’ individual rooms and commons areas. When the programs load, Rasmussen switches between screens showing maps of various building floorplans and offices, overlaid by a rainbow of colors designating equipment functions and heat.

With a few taps of his finger, Rasmussen turns chilled rooms hot, and dry suites humid. He performs this task in real-time or weeks in advance using a scheduling system.

There’s a sense of strategy to the work. Rasmussen determines the timing for environmental changes within spaces with people’s work schedules in mind. Classrooms are cooled to reasonable levels when students go home for the night. Gymnasiums are warmed up before a crowd is expected to arrive for a sporting event in the afternoon.

The most important determinant of Rasmussen’s work, though, are the people inhabiting the environments he controls.

“All they have to do is let me know if the room is too cold or too hot,” he says.

Not everyone is aware of the systems in place to request environmental changes in individual spaces. The deed is as easy as clicking a “Request Maintenance” tab on the university’s website. Rasmussen doesn’t mind the extra workload, he says. Minding his mantra — “I want people to be comfortable” — is what matters to him.

There are other elements of his job that keep the Grayling native busy and send him outside of his corner of campus. Equipment in need of repair is one of those duties. Recently, he absorbed foreman responsibilities from a co-worker who retired.

The work keeps him happy. He’s served at SVSU for 18 years and hopes to work there at least another decade.

“There’s not too many places where you come and enjoy work,” he says. “This is one of them.”

Next academic year, the youngest of his two daughters plans to attend the university. He’s not certain yet if she will live on campus or remain at home. Either way, Rasmussen adds, he will be the one who controls the temperature in her room.