Julie Keil spent 30 years as an attorney. It’s a career she has no desire to resuscitate.

“I don’t miss it,” said the assistant professor of political science.

Now that she’s exited the profession, her passion involves helping students interested in entering it.

In 2010, Keil and a group of students founded SVSU’s moot court program, where students act as attorneys in teams of two. They make arguments to a panel of judges by drawing from constitutional law and Supreme Court cases. Judges then decide winners based on public speaking ability, knowledge of cases and of law, and the ability to answer questions. 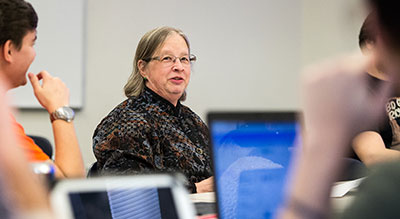 SVSU joined other universities with similar programs that competed within the American Moot Court Association. The organization hosts a series of tournaments across the nation that culminate in a national contest in January, when the top performing teams of students from each region gather.

The national tournament features elite students from prestigious universities across the nation. Keil said seeing one of her teams advance to the competition during the program’s history would have been considered a success.

An SVSU moot court team has advanced to the national tournament every single year of its existence. Sometimes more than one SVSU team has achieved that goal in a given year. For instance, four SVSU student tandems traveled to Gulfport this month to compete in the contest.

“It’s a huge source of pride,” Keil said of the program’s success. “These students are remarkably talented. And moot court was just a beginning for them.”

“Moot court has been a huge benefit for these students,” Keil said. “It doesn’t get them into law school, but it helps them when they get there.”

She is quick to give credit for the program’s success to hardworking students as well as faculty and staff who volunteer to help the moot court teams prepare for competitions.

Recently, Keil also began asking high school students who are prospective SVSU moot court members to help the program with various tasks. She hopes to develop the initiative into a full-fledged recruitment program for moot court.

When she’s not teaching in classrooms or working with moot court students, Keil enjoys traveling. She plans to combine her love for travel and research in May, when she visits Rome. Her research involves exploring the rights of financiers over the monuments they fund.

Eventually, Keil hopes, she will extend the moot court competitions to include international contests.

“We are ambitious,” she said.