There’s a photo on the wall of Tammy Elliott’s third floor Wickes office. In the foreground, there are trees and bushes, capped with white, untouched snow. Peeking out from a gap in the landscape is the red water tower that once stood tall on campus before it was removed in 2000.

“When I used to work at the Graphics Center, I would tell people they could find me by going to the building near the tower,” said Elliott, now SVSU’s special assistant to the provost. “It stood out.” 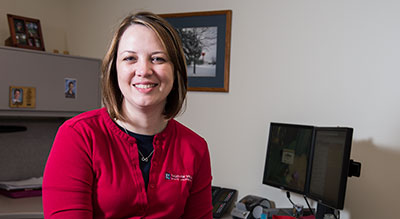 Much the same way as the tower once stood out for others, SVSU stood out from other higher education institutions for Elliott. As one of 136 seniors at Beaverton High School in 1989, nearly all of her college-bound classmates chose larger universities. Elliott wanted to take a route that seemed more adventurous; something that might allow her stand out from the rest.

“I wanted to try something different than what everyone else I knew was trying,” she said. “It worked out for me. I haven’t left since.”

Despite her 28-years-and-counting stay with the university, she hasn’t lost her appetite for challenging herself with new endeavors.

Elliott’s undergraduate years were spent studying graphic design. By the time she graduated in May 1996 with a bachelor’s degree in the subject, she already had been hired for more than a year as a full-time employee in the campus Graphics Center.

Soon, though, she felt the itch for a new challenge. The same year she graduated, she was hired as the administrative secretary at the office now known as University Communications. She retained that same title when she moved on to a new challenge at the College of Education in 2003 and then another new challenge at Academic Affairs in 2011. Along the way, she earned a master’s degree in communications.

At Academic Affairs, Elliott worked in the same suite with Kristen Gregory, who retired as special assistant to the provost in 2015. The opening presented another challenge for Elliott. She applied and was hired for the position that largely oversees faculty workloads and classroom scheduling.

Elliott’s roles over the years have placed her in nearly every corner of campus — near landmarks that no longer exist, and in both buildings and offices long since re-named. She keeps reminders of her travels on campus hanging on her wall, but never loses a sense of adventure for the road ahead.

"I'm always looking for a new challenge here,” she said.