Remembered as an inspiration to classmates, Breckenridge native will receive posthumous degree at SVSU ceremony 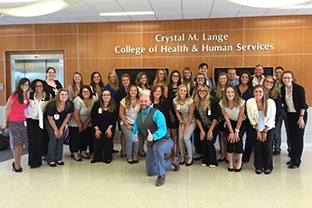 One year after Evan Willman's funeral, family and friends will gather for a different kind of ceremony where they will honor his legacy as a beloved classmate and dedicated student.

During Saginaw Valley State University's commencement ceremony Friday at 7:30 p.m. in O'Neill Arena, Willman's mother will accept an Honorary Master of Science in Occupational Therapy degree on her son's behalf.

Before he died following a fall from a moving vehicle in December 2016, Willman was on schedule to graduate this week alongside a close-knit cohort of 58 classmates enrolled in the same master's program. SVSU’s occupational therapy program teams the same group of students in courses and activities from their first semester in the program until their graduation. This particular cohort (shown in part in the adjoining photo, with Willman in front, giving the thumbs-up sign) will be among 570 SVSU total graduates participating in commencement ceremonies Friday and Saturday.

"I hope that he would have been proud of himself for accomplishing enough to receive this degree," said his mother, Rebecca Willman. "I know I'm proud of what he accomplished."

Her son was a standout member of the latest class graduating from SVSU's Master of Science in Occupational Therapy program, classmates and faculty say. His outgoing personality and radiant charm won him friends, impacted lives and influenced wardrobe choices.

"He originated something we called 'Flannel Fridays,'" said Cody Zietz, a classmate from the master's program who befriended Willman.

Willman and his classmates followed the program's dress code: khakis and polos, as is typically worn by professionals in occupational therapy. But Willman convinced faculty members to allow the group to don flannel attire on Fridays as a way to express camaraderie. The weekly tradition also involved bringing pancake ingredients to campus and cooking breakfast for the group.

The 23-year-old's death devastated many on campus who knew him. Weeks later, when Willman's parents visited campus to close their son's affairs with the university, they were met by students, faculty, staff and administrators who encouraged them to request a posthumous degree.

Receiving such an honor is a relatively rare occurrence. Academic committees, administrators and registrar officials must review each request to determine the student's eligibility based on several factors. Willman's honorary degree was approved in time for the university's May commencement, but his parents asked to postpone the recognition until he could be honored along with his classmates, scheduled to graduate this week.

Ellen Herlache-Pretzer, an SVSU assistant professor of occupational therapy who worked with Willman's group, said the honorary degree is a fitting tribute to her former student and a solemn comfort to his classmates.

"A lot of people looked up to Evan," she said. "They are happy to see him have a chance to finish with them, in a way."

Willman's journey to SVSU began long before his freshman year, his mother said. When his grandmother suffered a stroke in 2006, the family's involvement in the recovery process exposed the then-middle school student to occupational therapy.

"He was fascinated by her therapy sessions," his mother said. "That's where he figured out what he wanted to be. He had a strong desire to help people."

Willman's other interests included athletics. He was a member of all-area football and baseball teams while at Breckenridge High School, where he graduated in 2011. When he enrolled at SVSU, he joined the men's rugby club team, eventually becoming a team captain.

Classmates also were aware of his love for the outdoors. When Willman befriended Zietz, the two became hunting and fishing buddies.

At SVSU, Willman also met Mary Iott, a student in the Master of Science in Occupational Therapy cohort one year ahead of Willman's group. The couple fell in love and were engaged to be married in August 2017. She graduated from SVSU days before his death.

In the wake of that tragedy, Willman's classmates organized a GoFundMe webpage, raising more than $10,000 to pay for their classmate's funeral. Because of that support, his family was able to afford using Willman's life insurance to create The 3-Cent Scholarship in honor of Willman and the amount of money left behind in his bank account.

"We have this saying about Evan," his mother said. "We say, 'He lived life to the fullest … and a bank account to show it.'"

His SVSU classmates aren't finished honoring Willman. During this week's ceremony at SVSU, members of his master's program cohort plan to pin flannel fabric to their commencement robes, observing Flannel Friday one last time for their friend.

"Even though he's not going to be there with us, we wanted to show he made a lasting impression," Zietz said, "because that's what he did."