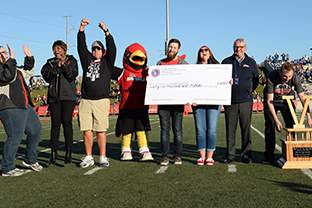 Saginaw Valley State University students will direct their passion for supporting the community by raising funds for an organization that helps homeless women with children during the 15th annual “Battle of the Valleys” fundraising competition. SVSU students will raise funds for The Mustard Seed when they compete against their rivals from Grand Valley State University during the week-long challenge this coming fall.

The SVSU Student Association received more than 50 applications from various charitable organizations, which is believed to be a record number.

The Mustard Seed shelter is located on Saginaw’s east side; it provides the basics such as shelter, food and a caring home environment as it helps homeless women with children move from homelessness to self-sufficiency.

The shelter enjoys a strong relationship with SVSU’s social work department, including hosting students for field placements. Caitlin Coulter, a pre-medicine major from Clio and 2017 Battle of the Valleys chair, said that was “a very important factor” in the decision-making process, as was their desire to be an active charity partner.

“We chose Mustard Seed due to their passion of helping those in need, and their excitement for working with Student Association and SVSU in the entire sequence of events for ‘Battle of the Valleys,’” she said. “We love to see organizations that have a connection to the surrounding region, and that want to benefit more than monetarily from this university-wide initiative.”

In 2016, SVSU students raised $26,000 for Hidden Harvest, an organization that works to alleviate hunger and end food waste in the Great Lakes Bay Region.

“Battle of the Valleys” began in 2003 to capitalize upon the schools' football rivalry by raising funds for deserving non-profits. Over the past 14 years, the competition has generated $552,150 in charitable donations between the two schools. SVSU students have raised a total of $357,329 during that time, winning 11 of the 14 annual competitions.

The 2017 “Battle of the Valleys” fundraising campaign will be held September 24-29, and the winner will be announced at the football game between SVSU and GVSU Saturday, Sept. 30.