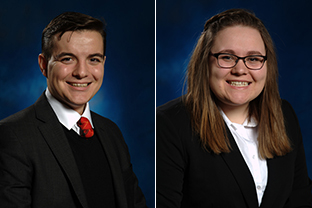 Four Saginaw Valley State University students capped off a year of determined study and preparation with a strong showing at a national moot court tournament at the University of Chicago.

Two SVSU teams of two students each competed in the National Invitational Tournament on April 7 and 8. The tournament, which consisted of 18 teams, is designed for teams that did not qualify for the American Moot Court Association's national tournament, which was held in January.

The team of Danielle Musselman, a communications major from Mancelona, and Jacquob Littlejohn, a political science major from Auburn, delivered effective oral arguments and finished third overall, falling to a team from the host school.

Musselman also received a sixth place orator's award, making her the first student from SVSU's moot court program to win the award at the National Invitational Tournament. The honor marks the first time SVSU won an orator’s award at both the national and national invitational tournaments.

Meanwhile, the team of Alex Partridge, a history major from Vassar, and Hayley Tomich, a pre-law major from Chesterfield Township, advanced to finish in the top eight.

The four students' performances in the tournament were the culmination of the best year of competition that the SVSU moot court program has had. In addition to the orator award success, the program had six of its eight teams compete in the national tournament or national invitational tournament.

“That was by far the best finish we’ve had,” said Julie Keil, an assistant professor of political science and the advisor to SVSU's moot court program.

Each year, the American Moot Court Association organizers create a single fictional U.S. Supreme Court case - often based on actual cases heard in lower courts - that competitors must address when participating in the regional and national tournaments. The students make arguments to a panel of judges by drawing from constitutional law and Supreme Court cases. Judges then decide winners based on public speaking ability, knowledge of cases and of law, and the ability to answer questions.

This year's case study concerned voter rights. The AMCA will announce a new case study on May 1.

Keil said SVSU's moot court program, now in its sixth year of existence, continues to grow. There are now three assistant coaches who work with the students, whereas the program started with just Keil helping the students.

"Having a lot of one-on-one attention really helps," Keil said. "And we're getting some really good students."