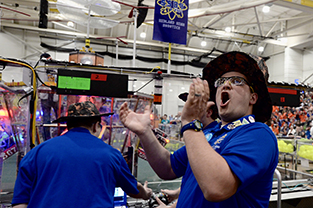 Thousands of students descended on Saginaw Valley State University April 12-15 to demonstrate determination during the FIRST Robotics state championships. It was the first time SVSU has hosted the event, which drew two alumni back to campus as coaches.

“SVSU has been a great venue for this event,” he  said. “This makes me proud.”

His sentiment was shared by Bob LaRocque, a teacher at Bay City John Glenn High School who was impressed by the high-energy, fast-paced event.

“It’s been a fantastic experience,” he said. “It was a great idea to bring FIRST Robotics here.”

In hosting the statewide event, SVSU welcomed some 7,500 visitors to campus, resulting in an estimated an economic impact of $1.2 million for the Great Lakes Bay Region.

The teachers say the educational benefit of FIRST Robotics is worth its weight in gold.

LaRocque helped establish John Glenn’s FIRST Robotics group — named “JGHS” — two years ago as a way to develop the plethora of academic interests involved in managing such a team. Teammates engineer robots to compete against opposing groups using autonomous and remote-controlled robots piloted by the students. They also are charged with raising funds to purchase technology, which is a task that often involves marketing and business savvy.

Embarking on such a multidimensional effort amounts to an educational experience that comes at a time when many of the participants are nearing the end of their high school lives, so organizing the tournament in a postsecondary setting was wise, LaRocque said.

“FIRST Robotics in some ways gives them a college experience, so it makes sense to bring this competition to a place like SVSU,” said LaRocque, who received a bachelor’s degree in French and a teaching certificate from SVSU in 2007 and 2009, respectively.

A proud member of the SVSU marching band while a student, Younkin graduated a few years ago, but never left the Cardinal family. He enjoyed using the occasion as a reunion with his alma mater and an opportunity to show off his old haunts to his students. Younkin, who earned a bachelor’s degree in math education and a master’s degree in instrumental teaching in 2010 and 2013, respectively, hopes FIRST Robotics returns to SVSU in 2018.

“Getting these FIRST Robotics students to a university like this is powerful,” he said. “It exposes them to a setting they might not otherwise see at a crucial time in their lives.”