Sue Brasseur didn’t have the luxury of Tinkerbell pixie dust when helping organize the FIRST Robotics statewide competition in April, but that didn’t stop The Conference Center at SVSU’s director from helping a show earn magical reviews.

At least one of the 7,000-plus visitors during the four-day Robotics stay compared SVSU’s hospitality to a “Disney-like” experience. Plenty more compliments poured in to the campus following the contest, but the Disney analogy was the most touching and flattering compliment for Brasseur, who has strived for such excellence since attending a Disney workshop on hospitality.

“I wanted to make sure FIRST Robotics was the best experience for these first-time guests, and that the university would shine,” she said.

“To bring all these people onto campus and have it fail: That wasn’t something I was going to settle for. To have a ‘Disney-like’ experience means you are going above and beyond the expectations of someone. They were expecting A, you gave them A, and then you also gave them B, C and D and so on.” 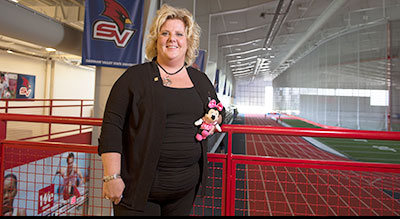 The accomplishment was especially satisfying considering the degree of difficulty involved. Hosting an event the size of FIRST Robotics ideally involves two years of preparation time and planning, she said. SVSU had 17 weeks to gear up for the gathering after organizers committed to the venue.

“Bigger than the Lions,” said Brasseur, referring to the Detroit NFL franchise that hosted its training camps at SVSU’s campus in the late 1990s.

She helped coordinate — along with other with FIRST Robotics’ organizers — the 160 high school teams that competed, and high-profile guests such as Gov. Rick Snyder and U.S. Senator Gary Peters. On top of that, the event happened during a busy academic semester.

Tackling all those elements involved many people working massive amounts of hours during the days and weeks leading up to the event. During the four days of set-up and four days of the event, Brasseur logged 125 hours of work. There are 192 hours in an 8-day span.

Brasseur said the effort involved coordination between several branches of the university.

“Things like this can’t happen without a team environment,” she said. “My team at The Conference Center at SVSU is exceptional. All the departments and offices that helped make this happen were exceptional.”

And they might need to pull it off again, albeit next time with much more advance notice. Brasseur said the university is in discussions with FIRST Robotics for a return in 2018.