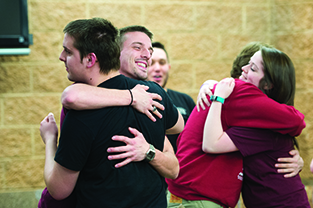 Along with the anxieties of the world outside of campus, stress can lead some college students to see the glass as half-empty. Members of SVSU’s Optimistic Club, however, hope to fill those metaphorical glasses to the top.

"Too often we see people walking around, looking like they are having a bad day,” said Paige Teregan, a special education major from Lake Orion who leads the student organization. "Our main goal is to make them smile."

Established in 2012, the registered student organization promotes happiness and positivity through little acts of kindness.

One of the programs includes members’ sticky notes campaigns, when they place Post-its on walls and windows across campus. Each note features encouraging messages meant to inspire. "Confidence is the first step to success," one note read. Another: "Keep going. You're almost there."

As project manager of the club, Jacob Jacopec, a business major from Holly, said the group tries to cheer up their peers especially near finals week, when stress levels are highest for many students.

Each month, the club focuses their attention on a different program. There was the time members super-sized the Post-it note initiative by writing cheerful messages on large billboards while standing in high-traffic hallways.

“I'd take your place in The Hunger Games,” one sign read. “Act like a proton and think positive,” “Always look on the bright side," and “beYOUtiful” were some of the other messages.

“I’d say it's a job well done when people are frowning as they walk past but look up to see the boards and end up laughing or saying, ‘aww,’” Jacopec said.

One of Teregan’s favorite initiatives is the “free hugs” program, which involves members offering hugs to students willing to accept the offer.

“It may be a little strange to some people, but others absolutely love it,” Teregan said. “Our hugs will make their day, and receiving so many hugs in one day makes me feel better, too.”

Such good will works for students such as Emma Eldred, a nursing major from Lake Isabella and the SVSU Student Association’s philanthropy chair.

“Throughout my years at SVSU, I have seen how the smallest acts of kindness can make an impact,” Eldred said.

“From the sticky notes at finals that encourage you, to getting a hug from a stranger, Optimistic Club has taken steps to change this campus for the better. They’ve definitely changed my experience for the better, too.”