Two weeks into her 6-week obedience class, Brook the chocolate lab puppy still doesn’t respond positively to Pamela Wegener’s commands to stay inside the house. The result sometimes leads Wegener on foot chases across her family’s 15-acre Midland County property, in pursuit of the 5-month-old dog.

“We haven’t gotten to the point where, ‘Come back,’ works,” Wegener said. “We’ll get there.”

Wegener’s faith in the power of “come back” extends to her work at SVSU, where she serves as associate director of Alumni Relations.

The office aims to keep graduates engaged with their alma mater long after graduation in part by reminding them of why they enjoyed SVSU as students. Wegener can testify to SVSU’s institutional magnetism. It’s what brought her back to the campus after she graduated with a bachelor’s degree in business administration there in 1992. 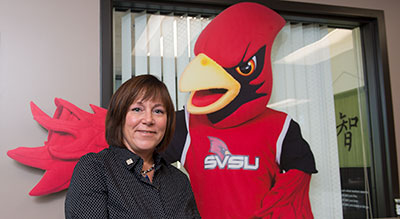 After spending the next 13 years in jobs at Dow Chemical Co., Delphi Corp. and the Bay Area Chamber of Commerce, she was recruited to return to her alma mater in 2005 by Gene Hamilton, who retired recently as SVSU’s director of external affairs. He was impressed with Wegener’s Chamber of Commerce work developing programs that engaged businesses with local schools.

“Being that I loved SVSU, I was really passionate about coming back,” Wegener said.

She began as an assistant director of Alumni Relations, where she helped develop the first issues of Reflections magazine, organized alumni events and maintained records. Wegener remained in that role until 2010, when she was hired as special project coordinator for administration and business affairs.

Shortly after Don Bachand was installed as president in 2013, he placed a new emphasis on Alumni Relations. The reorganization that followed included Wegener’s return to the office, along with a slew of new programs aimed at more actively engaging graduates.

Some of her responsibilities today include overseeing communications through Alumni Relations’ Facebook, Twitter and LinkedIn accounts as well as the university’s new social media tool, SVSU Connect.

One of her favorite roles involves interacting with graduating seniors as part of the new 63 Days To Graduation program. The initiative allows her to speak 1-on-1 with students in their final weeks as undergraduates.

“It’s inspiring,” she said. “I love to hear about their experiences and how they plan to use their degrees after graduation.”

Although the program is less than a year old, those initial interactions already have resulted in continuing relationships with the students-turned-alumni. The increasing traffic in her Wickes Hall office offered proof recent graduates are obliging her invitation to “come back home,” Wegener said.

It’s the sort of response she soon hopes to receive from Brook the chocolate lab puppy.