If you’re trying to conceal the nature of your conversation by speaking in a non-English language in front of Kate Scott, your secret might not be so safe.

The director of the English Language Program (ELP) is charged with helping international students learn English, but the extent of her handle on other languages remains a source of mystery to those on campus — and that’s the way she likes it.

“There was this one student talking to another who hadn’t bought his textbook yet,” Scott recalled. “They were going back in forth (in Arabic) about this until, finally, I told him, ‘You just need to go to the bookstore.’ They both looked at me a little surprised. ‘You know what we were saying?’” 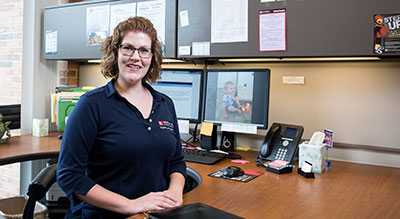 Mostly she knew what they were saying, at least.

“I just left it at that,” she said with a smile.

Scott’s understanding of that particular language began in the Sudan, where she served as a third grade teacher shortly after graduating from SVSU as an elementary education major in 2007.

Her 3-year stint in the northeastern African nation — where they speak Arabic — helped inspire Scott to continue working in international education when she returned to the United States in 2010. That inspiration led her back to SVSU, where she began as a teacher in the ELP that same year, largely working with students from Saudi Arabia.

Scott was hired as the program’s assistant director in 2011 and became director in early 2014.

“I love my staff,” the Kalamazoo native said of the 19 people she oversees. “They’re one of the reasons why I like my job so much. They are considerate, competent and genuinely like each other.”

The team sometimes turns meetings into potlucks; other times, the group enjoys organizing outings with the program’s students. In addition to the 22 hours of intensive language instruction students receive each week, “We also want to make sure the students have an authentic experience in our community,” Scott said. For instance, her staff and students earlier this month visited Johnson’s Giant Pumpkin Farm in Saginaw.

It’s not all fun and games, however. The ELP recently earned some serious stripes. In August, the program received SVSU’s first 4-year accreditation designation from The Commission on English Language Program Accreditation.

Scott is proud of the accomplishment, and the program in general, which is celebrating its 20th year on campus.

“It’s one of the best places you could work,” she said of the program.

She might be able to inform people of that fact in more languages than one — she just won’t tell you how many.