The following profile appears in the fall 2016 edition of Reflections magazine. Following the profile is online exclusive material featuring a timeline of Gene Hamilton's career and his thoughts on aspects of his professional life. 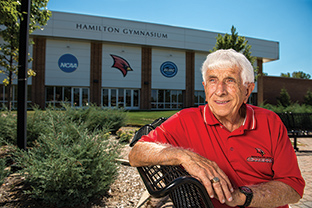 In his 47 years at SVSU, Gene Hamilton showcased his faith in the institution as he answered “yes” to multiple challenges, charges and positions given to him, knowing that the request was always intended to be in the best interest of the university, for the good of its students and the good of the community. That faith and his success in executing it were recognized in June 2016, when Hamilton — surrounded by family, cohorts and supporters — witnessed the renaming of Cardinal Gym to Hamilton Gymnasium, days before his retirement.

Many who know Hamilton know the story of how he arrived at SVSU in 1969 via a chance encounter at Owosso St. Paul High School with Paul Gill, an admissions representative who later retired from his position in the SVSU financial aid office. Gill talked to Hamilton — then a coach, teacher and guidance counselor at St. Paul — and saw a hard-working, multiple hat-wearing guy who would be a perfect fit for a fledgling college headed toward its imagined future.

When Hamilton and Mary Pat, Gene’s wife, met with the college’s president at the time, Sam Marble, Hamilton sensed the palpable sincerity of Marble’s vision of a great university. The Hamiltons decided a leap of faith was in order, and in 1969, he joined the admissions staff.

Over the course of nearly a half-century, Hamilton worked in cooperative education, economic development, international programs, conference bureau, advancement, community affairs and government relations. And, along the way, he coached a few basketball games, helped identify the “Cardinal” as SVSU’s mascot, and secured his Ph.D.

Now that he is a retired Cardinal, Hamilton looks back — not so much at his many titles and positions — but at the life lessons that came from the challenges he accepted.

“I learned from every president I worked for and a lot from colleagues,” Hamilton said. “That group taught me how to view both the academic as well as business side of a university.”

He said “the greatest lessons” he learned from those colleagues were perseverance and the value of forming friendships.

“It’s really always been about people; whether working with legislators or students, it’s been about forming relationships,” he said. “That’s my life at SVSU and that’s the way my life will go on. I’ll continually look to see if there’s something I can do to help. And I’ll be out in the community doing the same.” 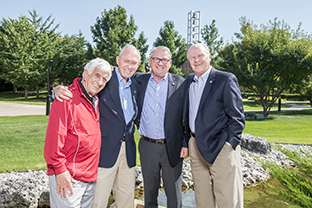 The following is a Reflections magazine online exclusive, featuring a deeper dive into Hamilton’s history at SVSU and his thoughts on his 47-year career there, starting with a timeline of his professional career: 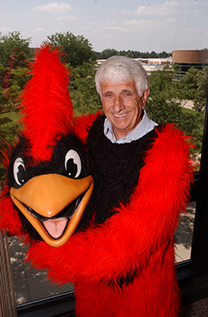 ‌Hamilton also shared his thoughts on certain aspects of his career, beginning with his origins with SVSU's sports programs in the late 1960s and early '70s:

“You have to remember, Athletics had no facilities (at the time). The administration wanted Athletics, and wanted to start with golf and basketball. They had someone else in mind as basketball coach, but asked if I would be the assistant. In the middle of the planning, that coach decided not to come to SVC and so I was asked, ‘will you coach?’ I said, ‘yes.’

In the third year, the school hired an athletic director who was also to be coach. He was here about a month and wanted to focus on the bigger picture and I was asked if I would take over as coach. I said ‘yes.’ That’s when Cardinal Gym was built, 1971.”

On his government relations role:

“I loved the early days. Legislators were friends. I remember the days when I’d pick up Jon Cisky (then a Republican state senator) and Jim O’Neill (then a Democrat in the state House), and we’d stop, get coffee and donuts, and drive to Lansing together. Over the years, that camaraderie has been replaced by partisanship. Partisanship has become so intense. Bi-partisanship and teamwork is challenging, but it is so much better.”