Kay Castillo can tell you the professional whereabouts of all her students, both past and present.

That acute awareness is one of the byproducts of being the lone faculty member in her academic program, medical laboratory science, which the associate professor has led since she joined SVSU in 2009.

“Some of them, I haven’t seen in years, but I hear about them and know what they’re up to,” she said of the 75 program graduates. “A lot of them work nearby, so I see them quite a bit. Others, every once in a while, will contact me. I really enjoy hearing about their success.”

Castillo built a “medical laboratory science alumni” Facebook page where many of those graduates maintain their connection to each other and the university. An annual cookie-incentivized holiday party in the Health & Human Services building brings together grads and current students in the program, which admits 15 people at a time. 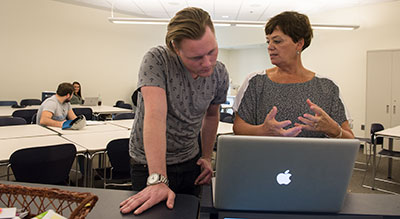 The medical laboratory science program seemed to be a hit with  NAACLS. While the agency isn’t expected to rule on their findings until March 2017, the site visitors provided positive reviews before departing, Castillo said.

“They found no deficiencies and nothing that needed to be fixed,” she said.

In collecting data for the site reviewers, Castillo was able to chart how the program helped its graduates succeed professionally.  The effort included mapping out the whereabouts of those former students. The resulting data showed that most graduates are working in the profession, including 52 who earned jobs in the mid-Michigan region. The largest chunk of that group — 15 — work at Covenant HealthCare.

The Thomas Township native served as the core lab manager at the Saginaw-based healthcare facility in 2008 when she attended the Michigan Association of Laboratory Science Educators bi-annual conference. There, she met David Stanton, SVSU professor of biology, who taught an early incarnation of the medical laboratory science classes. Stanton then connected her with Rene Hernandez, assistant professor of health science, who lobbied — successfully — for Castillo to join SVSU.

She hasn’t regretted the move since.

“It’s been busy, but I love it because of the students,” Castillo said. “It’s like we’re a family, all working toward a purpose. They’re succeeding, and many of them are getting jobs, really, before they’ve even graduated. It’s exciting to see and be a part of.”