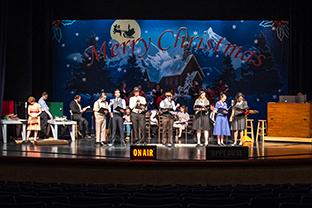 This one-hour play will relive the hope, the determination and the patriotic celebration of the holiday season during the post-World War II years. The production is a callback to the days when Americans sat around the radios in their homes, waiting for information during and immediately following World War II.

Showtimes are 7:30 p.m. Wednesday and Thursday, Nov. 30-Dec. 1, in the Malcolm Field Theatre for Performing Arts. Tickets cost $13 for the general public, and $10 for both students and attendees 60 and older.

The cast will include student thespians along with students involved in SVSU’s Cardinal Singers vocalist group. This production will mark the seventh year SVSU has hosted a live radio show-style performance in the theatre.

For more information or to order tickets, contact the Box Office at (989) 964-4261 or purchase tickets online at http://purchase.tickets.com/buy/TicketPurchase?organ_val=22481&schedule=list .