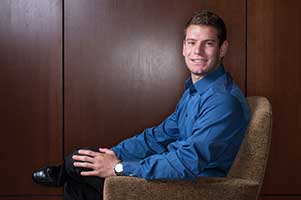 On a warm October day in 2011 on Michigan Tech University’s football field, Scott Stanford experienced one of his first feelings of success at Saginaw Valley State University.

Stanford, a freshman kicker on the Cardinal football team that season, had already sent two field goal kicks sailing between the goal post uprights — including a 45-yard boot — by the time the GLIAC rivals began overtime play. The third kick, if Stanford could hit it, would win the game and lift the SVSU Cardinals above Michigan Tech in the GLIAC North standings.

“I had already hit a few field goals, so I was relaxed by that point,” Stanford remembers of the moment.

Yes, the story ends well for Stanford: He nailed the 23-yard attempt to win the game for SVSU, 44-41. Teammates and traveling fans cheered in celebration.

Stanford expects to hear another kind of cheering when the Novi native’s name is called during SVSU’s May 2016 commencement ceremonies. In many respects, Stanford has kept his winning streak alive since that October 2011 moment, with the latest victory arriving because of his successful completion of SVSU’s bachelor’s degree program in accounting.

“My experience at Saginaw Valley was really great,” he said. “I really enjoyed my time there. I was able to have the college experience I was looking for, and was prepared well for my career afterward.”

That “career” may begin at the Plante Moran accounting services office near his hometown of Novi. In the absence of one scenario that could change his plans (more on that later), Stanford expects to begin work as a full-time auditor in August 2016.

The job was offered to Stanford based on the accounting know-how he displayed during an internship in that same office for four months beginning in January 2016.

That internship opportunity happened when Stanford attended the SVSU Career Services-hosted Accounting and Finance Fair in September 2015, when employers such as Plante Moran visited the campus and met with its deep pool of prospective workers. After a follow-up interview, Stanford was offered an internship that involved participating in audits of companies from industries including construction, manufacturing and nonprofits.

The work was perfectly suited for Stanford’s interest and off-the-field abilities.

“I always liked numbers, so I’ve known for a while that I wanted to go into accounting,” he said. “With that subject, there’s just so much to learn. There are so many rules and regulations. I can go into work and know I’m going to learn something new every day.”

Learning was a priority for Stanford during his undergraduate studies. His focus on the classroom even shined through in his collegiate football life. One of his proudest accomplishments at SVSU came when he was named to the 2013 Capital One Academic All-America Division II Football Team, which recognized 49 athletes nationally that excelled academically that year.

“I’ve always wanted to do well academically and athletically,” he said. “That award was an honor for me to receive.”

“Ideally, I’m looking at the NFL,” he said. “The difficulty is in getting a foot in the door. I’m trying to market my name as a kicker right now, and get someone interested in me.”

Stanford works out five days a week with the help of a personal trainer to stay in shape in the event his number is called. He likely will know if an NFL team is interested by the time his Plante Moran job is scheduled to start.

“I’ll play it by ear,” he said. “For me to comfortably extend my offer, it will have to be something that’s a promising opportunity.”

Stanford recognizes very few people play in the NFL, but is optimistic — if given the chance — he can keep his on-the-field winning streak alive before he turns his attention toward his off-the-field talents.