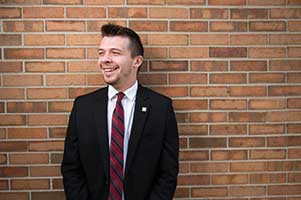 Lending a helping hand to the community has been at the core of Riley Hupfer’s character throughout his time at SVSU.

Hupfer, who will graduate with a bachelor’s degree in communication in May, has a strong passion for helping those in need. He has demonstrated this through his contributions to several service projects including those for Habitat for Humanity and other non-profits.

“Very few individuals in our society today possess the kind of passion for serving others, and genuine interest in the 'common good' like Riley does,” said Bryan Crainer, SVSU associate dean of student life and leadership programs.

“Those of us that have been in Student Life throughout Riley's college career have been fortunate to watch him grow into a true student leader.”

Hupfer was involved with community service growing up but became intensively involved upon his arrival to SVSU.

“I’ve adopted a mindset that we’re all here together, so let’s work together. If you are privileged or able to give, you should,” he said.

Standing prominently among his list of accomplishments at SVSU is organizing the “Cardboard City” event. The purpose of this event was to raise awareness about homelessness. Students watched the documentary “Living on One Dollar,” and afterwards, slept outside in cardboard boxes. Hupfer facilitated the planning and execution of the event, spending countless hours collecting cardboard boxes and spreading the word.

“Sleeping outside was really uncomfortable,” he said. “Being in the shoes of someone who does it every day was a great experience. I’ll never really know what it’s like to be homeless, but it gave me a new perspective and a higher degree of understanding.”

When asked about the origin of his generous and caring spirit, the Freeland native shared that he was fortunate enough to develop a relationship with an autistic student from Freeland High School.  This connection offered him a new perspective and helped him to recognize that people need others to lean on.

Through Alternative Breaks, a student organization that sends students to volunteer across the U.S. during winter and spring breaks, Hupfer has joined seven Habitat for Humanity efforts. He will participate in an eighth service project when he visits Alaska after graduation.

What's next for Hupfer? He is enrolled as a graduate student at SVSU, where he will study in the university's Master's of Arts in Public Administration program in the program's student affairs track. Eventually, Hupfer hopes to seek a job in a university office that works closely with students.

Hupfer is also part of an alternative rock band—called Last Night Saved My Life—with four of his friends from his hometown. They have been playing together since fall of 2010 and have dreams of making it big.

Aside from his band’s success, Hupfer is proud of all that he has accomplished at SVSU and is excited and prepared for what the future holds.

“I’ve learned to be comfortable with being uncomfortable,” he said. “Ninety-nine percent of the time it has led me to bettering myself.”