Future: full-time job with the FDIC 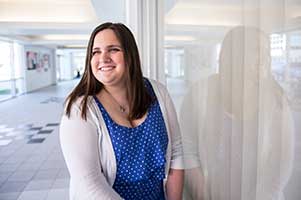 In the depths of a Utah canyon, Nicole Calandrino received a phone call with news that made her want to shout with joy from a mountaintop.

After a nationwide applicant search, the Saginaw Valley State University graduating senior earned a job interview at the Federal Deposit Insurance Corporation (FDIC), the agency created by Congress after the Great Depression to supervise and restore trust in the American banking system.

Calandrino received the news in January 2016 while volunteering at Best Friends Animal Sanctuary in Kanab, Utah during an SVSU-sponsored trip with classmates.

“I remember I barely had any cell phone reception the whole time, but then I started to get this call with a Virginia number,” she said. “There was one bar on my phone, and I had to shout to get them to understand me. I almost started crying, I was so happy.”

One month later, the Clinton Township native accepted a job offer — contingent upon her graduation — as a financial institutions specialist at the FDIC’s Grand Rapids office. Now, with her May 2016 graduation date approaching, the economics major is close to fulfilling the final requirement necessary to join the FDIC.

Earning the opportunity was no small feat. Calandrino was one of 1,000 candidates who applied and 93 interviewed for FDIC job openings across the nation earlier this year.

She plans to log her first day at work in July. The accomplishment is the culmination of years of dedicated studies, hard work and recognition as an exceptional student at SVSU.

That SVSU experience almost didn’t happen. After graduating from Chippewa Valley High School in 2011, she originally planned to attend a different higher education institution. But her sister, Heather, who was enrolled at SVSU, convinced the younger Calandrino to visit the campus and sit in on biology class.

Her sibling’s campaigning — along with being offered SVSU’s full-ride President’s Scholarship — led Calandrino to enroll at the Kochville Township university.

“That choice is really paying off now,” she said.

She began her college life with sights set on becoming a biology or chemical researcher, but her interests changed and an opportunity made possible through SVSU led to new aspirations. Through the university’s co-op program, she landed a risk management position at Buena Vista Township-based Nexteer Automotive’s finance department in November 2014.

“That’s been an invaluable experience,” she said. “I’ve been able to coordinate all data for Nexteer’s insurance renewal, work with people in 12 different countries, and help create standard processes for assessing risk worldwide. I discovered I really liked working with numbers.”

Later that year, she was one of a select group of students involved in The Vitito Global Leadership Institute, a three-semester-long student leadership development program offered by SVSU’s College of Business & Management.

“The Vitito program really helped me develop my leadership skills, and focus on international and business leadership,” she said. “Then we traveled to Budapest for eight days, which was amazing. We visited the U.S. embassy and one of the largest banks in Hungary, and talked to entrepreneurs there. I was immersed in the culture.”

She made lifelong friends through the Vitito initiative — along with a key mentor. Through the program, she met Dom Monastiere, SVSU’s Boutell/First Merit Bank Executive in Residence.

When Calandrino saw the FDIC job opening listed on SVSU’s Career Services website in August 2015, she sought advice from Monastiere, who spent 26 years as an executive with Midland-based Chemical Bank.

“He was really helpful in telling me what an FDIC official does and whether it was a good fit for me,” she said. “Normally, I ignore national job openings, but I felt something clicked with this job.”

She said her Nexteer Automotive co-op work and selection as a Vitito Fellow may have helped clinch her the job offer. “Those really set me apart,” she said.

Calandrino’s responsibilities will include working with banking institutions located largely along western Michigan. While those visits won’t send her to any more Utah canyons — or mountaintops, for that matter — Calandrino is thrilled about where SVSU has helped her land.

“I’m excited and ready to get started,” she said.