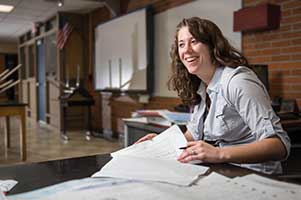 If teaching isn’t in Madeline Lefere’s DNA, she was certainly empowered with the role of educator at a young age.

It’s a role she doesn’t plan to relinquish as an adult.

Lefere, who will receive her bachelor’s degree in integrated science education from Saginaw Valley State University in May 2016, hopes to secure her first full-time teaching position shortly thereafter.

But she began teaching long before that. Lefere, whose mother taught third grade at a parochial school, is the oldest of four siblings. She also has 35 first cousins — yes, 35.

“My brothers are younger and so are a lot of my cousins, and I was like a teacher figure to them,” said Lefere, a Catholic who started by teaching bedtime prayers to her younger family members.

She also acted as a teacher to those who were older. At age 6, Lefere’s father at times asked her to give lessons to his catechism class.

“Teaching has always been a part of my life,” she said. “I don’t know how to turn it off now.”

During her last semester as an undergraduate, much of that self-discovery continued in a K-12 environment a few miles from campus, at Saginaw Township’s White Pine Middle School.

She began there in January 2016 as a student-teacher for seventh grade science, learning under the tutelage of a full-time educator. One month into the experience, school leaders felt confident enough in the early promise Lefere showed in the classroom that they elevated her to long-term substitute status. She was assigned to educate eighth grade earth science classes until the end of the academic year for a full-time teacher who resigned suddenly.

“This happened in the middle of the week, with no warning,” the Dundee native said of the quick role change. “They asked if I could step in, and I said, ‘Sure, I’m up for the challenge.’”

And it was a challenge. Lefere did not inherit a lesson plan from her predecessor. She improvised much of the material using strategies learned in her SVSU studies as well as the examples set by K-12 teachers who inspired her as a youth.

“For that first unit together, the students and I spent most of the time settling in with each other, and figuring out each other,” she said of her first weeks in the new role. “When you’re a student, and you go half the school year with one teacher, and then there’s a new teacher — and one who was a different gender, too — it can be quite an adjustment.”

Lefere, though, said she wasn’t intimidated. In fact, it has proven to be an exhilarating experience, she said. Many of the lesson plans she designed have involved hands-on experiments — including one activity where students were tasked with creating a diorama of the ocean floor based on a paper mache model that Lefere and her fiancé built.

She said the interactive, hands-on activities — as opposed to book-based assignments — helped better inspire students in their studies of science, technology, engineering and math, also known as STEM. Building interest in STEM among K-12 students is part of the classroom lesson plan for Lefere, who herself was inspired at a young age to enjoy such studies.

“You hear the word ‘science,’ and a lot of students think they are going to be taking a lot of notes and read a lot of textbooks,” she said.

“There’s so much more to it. There’s a lot of exploration and realizing you can find your own answers by performing experiments and analyzing data. That’s how I felt when I was in high school, and I would like to create that kind of excitement to investigate and explore in my students.”

She said already she’s made that kind of connection for some of her students.

“There are some instances where I could see they hadn’t thought about science in this way before,” Lefere said. “That’s what excites me about teaching.”

When the academic year ends, Lefere said she doesn’t plan on applying for the White Pine Middle School vacancy on a permanent basis. Instead, she will return to her hometown and seek a teaching job close to her family and soon-to-be husband.

Wherever she lands, Lefere is excited for her future as a teacher.

“I’ve learned so much about myself through education and through being an educator,” she said. “It’s a great profession.”