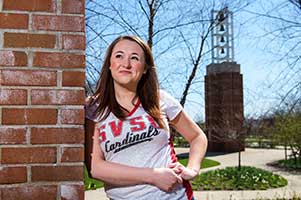 The sight of those T-shirts still makes Kimberly Salwey smile.

The graduating senior remembers spending one of the first days of her final year at Saginaw Valley State University selling 1,000 $1 shirts to freshmen. The sales were a fundraiser for Forever Red, a campus pride-inspiring organization that provided four $250 Cardinal Forever Initiative scholarships from the proceeds that day.

“It was a beautiful day out in the courtyard,” said Salwey, who served as president of Forever Red her senior year. “All of the Forever Red members were coming together to make this a success, and all the freshmen got their first dose of Red Pride.

“This past year, the Cardinal Forever Initiative was different for me because I really grasped the concept of giving back. It was a great way to kick off my senior year. Today, I can still walk through the halls and find students wearing the shirt, and that brings a smile to my face.”

Her inspired efforts brought Salwey a number of other things this academic year, too, including a full-time job offer. Thanks in part to connections she made through her SVSU network, Salwey was offered — and accepted — a travel expert position at the Bay City office of Great Lakes Bay Regional Convention & Visitors Bureau.

Her first day is May 23, when she will begin working largely with the organization’s website, www.gogreat.com, which provides information on lodging, events, restaurants and tons of other information on Great Lakes Bay Region communities.

“I’m ready for the next stage, the next adventure,” she said. “I’m very happy I’ll be able to stay close to home and close to SVSU, because that’s where my heart has been.”

Salwey received the Outstanding Student Leader award in February 2016 from the Council for Advancement and Support of Education (CASE) for a six-state region.

“I was really surprised and shocked to win this,” Salwey said. “I'm thankful because I wouldn't be who I am without my SVSU experience. I have been blessed to be surrounded and empowered by influential and strong leaders who have continuously pushed me to better myself.”

Among those mentors was Bryan Crainer, adviser of Forever Red.

“Kim is extraordinarily forward-thinking,” said Crainer, SVSU associate dean of student life and leadership programs. “What has made her such a dynamic student leader on our campus and such an extreme benefit to Forever Red is that she is constantly looking for ways in which the organization can improve.”

And Salwey is constantly looking for ways to improve herself. That much is evident when considering Salwey’s accomplishments during her final semester at SVSU compared to the shy and timid demeanor of her freshman year in 2012.

Salwey was raised in the small, tight-knit community of East Tawas by family members with an extensive military and law enforcement background — but no experience in higher education. As a result, she arrived at SVSU in an environment with more strangers than she was accustomed to and with little college advice.

“My goal was to get involved,” Salwey said of her freshman year. “But I didn’t know how I was going to do that.”

The first hint of what was to come arrived when a classmate living in a neighboring housing suite on campus offered to sell her a Forever Red T-shirt.

“My second semester, I became a member of Forever Red,” she said. “From there, I started going to more things and meeting new people.”

The experience also helped Salwey discover a love of philanthropy.

“I always knew about the importance of giving back,” she said. “But I didn't realize it was going to be something I was so passionate about.”

Salwey was able to channel that newfound passion into initiatives that benefited SVSU and its students. A recent accomplishment included Forever Red's contributions to I Heart SV Week, a campaign in early February that raised both scholarship money and awareness about the importance of philanthropy. The effort resulted in $27,500 raised by Forever Red and the SVSU Foundation.

Salwey said the campaign encompassed the community engagement spirit that she has grown to love as a member of Forever Red and SVSU.