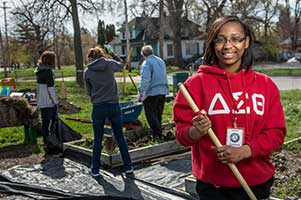 Keshara Mumford remembers what it was like to search for purpose in life. The Detroit native enrolled at Saginaw Valley State University initially as a criminal justice major, but spent much of her first year unsure of the decision — and her future.

But a group of mentors on campus provided a guiding beacon, leading her to realize both a calling as a social worker and a desire to provide guidance to others searching for the right path.

“No other school will have your back like SVSU,” said Mumford, whose volunteerism and charitable nature been recognized on campus and abroad.

“They prepared me socially and academically for life ahead. There were people who saw something in me, and they put me in a position to succeed.”

Eventually, she hopes to pursue a doctorate in educational leadership and eventually teach social work as a university professor.

While Mumford’s journey of success began with some uncertainties, the momentum gained since then led one of her mentors to consider her “one of the most outstanding social work majors SVSU” has graduated in years.

“She is the epitome of a service leader,” said Roberto Garcia, SVSU school improvement and transition specialist. “She has excelled in her opportunities, both on and off campus. Her volunteer work hours are above and beyond what a normal social work student would do.”

Garcia became acquainted with Mumford through his role in helping charter school graduates in their collegiate endeavors. Mumford arrived at the institution in 2011 from Chandler Park Academy, an SVSU-authorized charter school in Harper Woods near Detroit.

“She struggled a lot her first year,” Garcia remembered of Mumford’s initial uncertainty at SVSU. “Through hard work and perseverance, she has become exceptional at what she does.”

The seeds of Mumford’s niche in social work were planted in an SVSU social work class. The coursework resonated with her, and with some guidance from mentors such as Garcia, Mumford realized she wanted to explore the subject further — and beyond the classroom.

Mumford participated in a 2012 SVSU-sponsored trip that sent volunteers to Tahlequah, Oklahoma. There, she and her peers painted a youth center and renovated the home of a wheelchair-bound World War II veteran.

“To see a grown man cry and thank us for our services, I thought, ‘Wow, I want more of that,’” she said. “To express that much gratitude was amazing.”

Later, Mumford became involved in the United Way of Saginaw County’s Healthy Kids Healthy Futures Partnership AmeriCorps program. There, she worked to support and improve the lives of Saginaw youth.

“It gives me a sense of belonging and being connected to the community,” Mumford said.

The opportunity teamed her with the Boy Scouts of America’s Water and Woods Field Service Council, where she completed 900 hours of service as an outreach facilitator. Her efforts included teaching boys and girls about life skills, health and nutrition, substance abuse prevention and more.

She became involved in their lives outside of the council too, attending some of the students’ sporting events.

“After the first time I did that, one of the older boys came up to me and said, ‘I really appreciated that because no one ever came and cheered for me,’” Mumford recalled. “I thought, ‘Wow, this is why I’m doing this.’”

She also was an intern for the State of Michigan 10th Circuit Court Family Division office in Saginaw Township, where she worked to improve the lives of teenagers in trouble because of offenses such as retail fraud and truancy. Mumford said she is proud of the number of youths who have responded to the time and attention she gave them.

“If you keep working, keep reaching out to someone, you will crack the code,” she said. “You have to build a rapport and show them that you care. It can be a challenge but also very rewarding when you reach that person.”