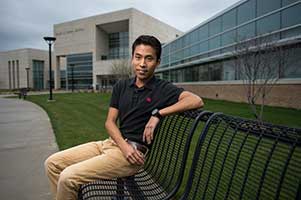 The funeral invitation came from a stranger.

Emmanuel Avelino, a Saginaw Valley State University student whose aspirations to pursue a career in medicine led him to volunteer at local hospitals, became acquainted with the stranger’s brother as he battled melanoma at MidMichigan Health Hospital in Midland. The prognosis wasn’t good; chemotherapy provided the 30-something with hope for a while, but when tests showed the skin cancer spreading into the skeletal and nervous systems, it was only a matter of time.

Still, Avelino showed up regularly to provide comfort — and occasionally goods — during the patient’s months-long struggle for life. And shortly after it ended during a hot, sticky stretch of summer in July 2015, Avelino found out the bad news via an invitation to a funeral.

“To this day, it really tears me up to think how I didn’t think I really knew this person — but, really, I did,” Avelino said. “I attended the funeral, and the magnitude of how much his family knew about me was shocking.”

The experience was one of many that reinforced Avelino’s passion for medicine and belief in the human relationships forged between doctors and patients. It’s a passion that will follow the biochemistry major to the Central Michigan University College of Medicine, which he will attend after he graduates from SVSU in May 2016.

“I want to help the sick and broken in this world, and help them overcome suffering,” he said. “It’s a huge responsibility, but it’s something that would fulfill my happiness.”

That determination to help people persevere stems, in part, from his own story of perseverance.

Avelino says he was raised “very poor” in the southeastern Asian nation of the Philippines until age 5, when his mother immigrated to Flint for a job in health care. As his mother advanced her career as an anesthetist — and subsequently lifted her family into middle class social status — Avelino and his two younger brothers moved with her to communities such as Brown City, Port Huron and Imlay City, where Avelino spent most of his life.

“I’ve had a taste of different lifestyles, from living urban to rural, from poor to what I am now,” he said. “That’s really helped me better understand people.”

With his single-parent mother working, Avelino often looked after his siblings, cooking and caring for them. When his mother returned from her job at various medical facilities, Avelino would quiz her on her day — a conversation that often involved stories of her interactions with patients and doctors.

That combination of caring for his siblings and talking shop with his mother provided some of the seeds for Avelino’s pursuit of a health care career. That pursuit brought him to SVSU, where he credits faculty and advisers for exposing him to environments that reinforced his love for medicine.

“There are so many people here who helped make me into a better person overall, whether it was through being more knowledgeable in the sciences or through personal development,” he said. “It is truly a privilege to have learned the art and science of medicine from SVSU. I deeply thank SVSU for giving me that opportunity.”

One of those strong environments was the SVSU chapter of Phi Delta Epsilon, an international medical fraternity. Avelino joined early in his undergraduate life and was part of a core group of students that raised more than $26,000 over the last three years to benefit The Children’s Miracle Network at Hurley Children’s Hospital.

The fundraising coincided with Phi Delta Epsilon members volunteering to spend time with children benefiting from The Children’s Miracle Network. In November 2015, that meant meeting Rowan Neumann, a 5-year-old fighting childhood leukemia. Avelino and the fraternity set up a tour of a Saginaw fire hall and a ride in a fire truck; both were wishes fulfilled for Rowan.

Spending time with the boy, Avelino was reminded of the sense of human connection and ultimate responsibility that accompanies aiding an ailing person — whether it be a child suffering from leukemia or a man facing death.

“As I venture through the realm of medicine, I hope to never divorce the idea of the human condition from the scientific aspect of disease,” Avelino said.

“I will always be there for patients until the end. I want to change people’s lives and enrich the communities of Michigan for the better.”