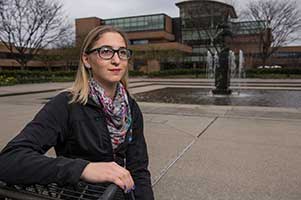 Emily Short demonstrates her passion for environmental preservation through her studies and her everyday life.

The chemistry major hopes to inspire others to become just as excited about science and environmental research as she is.

“I think science can be intimidating sometimes,” she said. “It doesn’t have to be an exclusive field. Anyone can get involved and learn how to protect the environment for future generations.”

Short was able to work with SVSU’s Saginaw Bay Environmental Science Institute, where she examined water samples from nearby rivers and lakes. She received hands-on experience collecting and testing water samples for contamination in a hydrolab. With SVSU’s new mobile lab, students were able to collect and test the samples immediately on site. Short was also able to engage the community, promoting environmental research to fellow undergraduates and K-12 students involved in SVSU-led science, technology, engineering, and math (STEM) initiatives.

The Foundation Scholar student recently finished a project on her research of E. coli in storm drains. She was able to present her project at the American Chemical Society National Meeting and Exposition in San Diego in March. More than 15,000 chemists attended the event, as well as 1,500 students.

Currently, Short is interviewing for positions involving environmental research; particularly water research. Eventually, she plans to pursue a Ph.D. in environmental chemistry. Short wants to use her degree to help preserve the environment.

“I see the amount of waste we create,” she said. “People need to be more mindful about what they are doing now, and how it will affect them later. I want to educate people about how to preserve the environment so that future generations can enjoy it as much as I have.”

Short makes a conscious effort everyday to recycle and use less energy and water. She also takes every opportunity to educate people on the effects of putting toxins down drains.

Not only has Short made huge strides toward bettering the environment, but she was also a star athlete for SVSU’s cross country and track teams.

As Short looks back on her athletic career, she is proud of what she has accomplished and how she has challenged herself. She says she has learned the importance of teamwork and how to better handle stressful situations.

“My teammates have become like family to me,” she said. “How can you not bond over 10 800-meter repeats?”