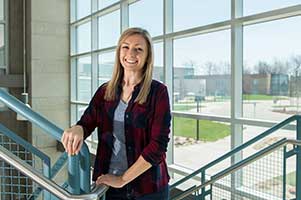 From the moment she arrived at Saginaw Valley State University, Christina Swain knew exactly what she wanted to accomplish.

Swain was an early admit into the nursing program. That is, she applied as a high school senior and had her spot saved for her when she arrived to the university.

The South Lyon native discovered she had a passion for science and teaching during her high school years.

“At first I wanted to be a teacher, but then I took AP [Advanced Placement] chemistry, which got me really interested in science,” she said. “I found that nursing was a way I could combine the two, and I am very happy with my decision.”

That decision has led her to land a job immediately after she receives a bachelor’s degree in nursing from SVSU in May 2016. Swain recently accepted an offer as a nurse in the surgical-trauma unit within Indiana University Health, an Indiana University School of Medicine-affiliated healthcare system in Indiana.

SVSU’s nursing program provided Swain with an opportunity to become a senior nursing mentor in SVSU’s simulation lab. There, she was able to help other nursing students excel in the program. According to Swain, academia comes easy, and she has the ability to explain material in a more practical way for students to grasp.

“Christina has been an outstanding student mentor and is respected by her peers, nursing faculty and the simulation educators,” said Sharon Panepucci, simulation lab coordinator. “Her compassion for others and eagerness to learn is going to make her a fantastic nurse.”

Swain was able to leave her footprint behind with her senior thesis project. She wrote a simulation for nursing students about a preterm infant going into respiratory distress. Swain made all the props, set them up and facilitated the simulation. She had so much satisfaction watching her project come together, and was proud to learn that the nursing instructors at SVSU plan to integrate her simulation into the curriculum for future nursing students. Swain will also present her project at a conference in Texas this June.

In addition to her senior thesis project, Swain traveled to Anchorage with a group of nursing students. There, they studied the effects of vitamin D exposure on depression and suicide. They were able to present their studies to the local hospital in Anchorage and at a conference in Milwaukee.

Not only was Swain involved with several prestigious academic projects, but she was also a part of the 2011 SVSU cross country team that made school history by going to Washington State University for nationals. She looks back on her cross-country experience as something that challenged her, but made her an all-around better individual. Swain said she learned a lot from being a student-athlete that she can apply to her professional career, and is grateful for teammates who became like family to her.

Swain is proud of all her accomplishments as she leaves SVSU and is excited to take the next step towards her future.

“I want to make an impact on the nursing profession as a whole,” she said. “I’ve gotten a good start here and I want to take that with me throughout my professional career.”