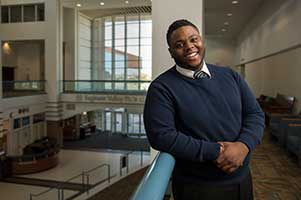 Brandon Jones describes himself as a man of purpose. He does his best to fulfill his genuine purpose every day at SVSU.

As Homecoming King, president of the Valley Voices Gospel Choir, member of Forever Red, student mentor and orientation leader, Jones has had a busy but fulfilling journey at SVSU.

“I don’t believe in labeling or being part of just one group. I have an open and loud personality, so getting involved on campus was natural for me,” he said.

Jones will graduate with a bachelor’s degree in business management in May, but plans to stick around SVSU to pursue a master’s degree in administrative science.

The Saginaw native has a passion for students and eventually wants to pursue a career as the dean of students at a university. He loves meeting new generations of Cardinals and hopes to make an impact on students that will stay with them forever.

Nick Wagner, SVSU’s director of institutional research, said Jones provided support to a student success grant-funded initiative, the King-Chavez-Parks 4S program. Jones advised and empowered hundreds of students who enrolled at SVSU, many of whom attribute their academic success to Jones.

“I will always remember the impact he tried to impart, whether it was providing counsel to a student about their semester schedule or just providing some encouraging words so someone could matriculate and persist,” Wagner said. “He willed himself to have a positive influence on many and he has achieved that and so much more during his time here at SVSU.”

Among Jones’ long list of achievements at SVSU, being named Homecoming King in 2015 is one he will always remember. “Breathtaking” is the word he used to describe the experience.

Jones and his Homecoming partner Charnae Keith, who was named queen, devoted hours upon hours into their campaign. They went above and beyond to make sure people remembered them. They even performed their own choreographic rendition of the music video “Thriller” by Michael Jackson. Ultimately, Jones enjoyed the process and was grateful to be recognized for his hard work and sacrifices.

Out of all his experiences at SVSU, being part of the Valley Voices Gospel Choir has impacted him the most. He has thought of the choir members as his family away from home. As president, Jones was responsible for teaching the music, managing the choir and making sure everyone felt they were in a safe place to worship and share their stories. The members of the choir pushed him to grow in his faith and as a leader, and supported him throughout his journey.

As Jones looks back on his experiences at SVSU, he is most grateful for the people he’s met at SVSU. He refers to his support group as his “chocolate chips,” and he claims that they have made him the person he is today. He hopes he has been able to impact people the way he has been impacted.

“If I had an impact on at least one person at SVSU, my job was fulfilled,” he said.