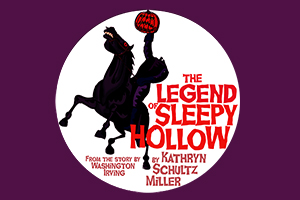 Tickets can be purchased directly by clicking here.

That's when SVSU's Department of Theatre will present the first of five productions of Washington Irving's classic tale, "The Legend of Sleepy Hollow," featuring the infamously noggin-less antagonist. The show is SVSU’s annual children’s production intended to introduce young people to theatre and inspire them.

Ric Roberts, SVSU professor of theatre and director of the production, promises a memorable “ride of The Headless Horseman,” a character known for using flaming pumpkins as weapons when terrorizing the townsfolk of Sleepy Hollow and protagonist Ichabod Crane.

“We use a combination of shadow puppetry and a moving bridge to simulate the chase between The Headless Horseman and Ichabod Crane,” Roberts said. “The flaming pumpkin is a special effect that will be produced by our own technical theatre department and the students.”

The Headless Horseman is played by Jonah Conner, a theatre major from Warren.

There also are six characters acting as storytellers, keeping the action and pace moving throughout. This adaptation remains dedicated to the spirit of the original work yet expertly involves the audience with suspense and comedy.

The play explores scary elements and music, but also is a humorous, G-rated show full of "goofy" characters, Roberts said.

“This stage version - a children's theatre production - is geared to third through sixth graders, but it can be enjoyed by the entire family,” Roberts said.

As such, SVSU will stage two productions of the play during school hours. Students from Kingston Elementary School, Pinconning Middle School and Swan Valley High School are among those expected to attend 10 a.m. showings Thursday and Friday, April 7-8.

The public - of all ages - is invited to each showing. Additional productions are scheduled for 7:30 p.m. Wednesday and Thursday, April 6-7; and 3 p.m. Saturday, April 9.

Tickets are $13 for general admission, $10 for students and seniors, and $7 for children under the age of 12. For more information, please contact the SVSU Box Office at (989) 964-4261 or visit www.svsu.edu/theatre‌‌.

Tickets can be purchased directly by clicking here.