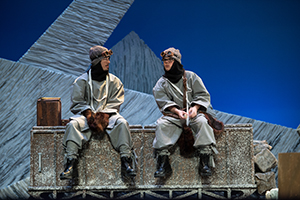 Saginaw Valley State University's Department of Theatre in February will present Ted Tally's play based on a real-life doomed expedition to the South Pole in the early 20th century.

“Terra Nova” will be performed Wednesday, Feb. 24 through Sunday, Feb. 28 in SVSU's Malcolm Field Theatre for Performing Arts. Wednesday through Saturday will feature 7:30 p.m. productions with a 3 p.m. matinee set for Sunday. Tickets are $13 for general admission and $10 for students and seniors.

Steve Erickson, SVSU professor of theater, will direct the play that is set in the winter of 1911-12, when two separate expeditions raced to the bottom of the earth. Only one group returned home alive.

“Terra Nova” follows the story of Captain Robert Falcon Scott, the English explorer whose expedition arrives in the South Pole only to discover a team of Norwegian explorers arrived days earlier.

The drama is set in the terrain of the Antarctic, where Scott and his crew face the harsh elements of the South Pole. The final tragedy is recounted in a mixture of fantasy and realism, which underlines both the human and epic qualities of their adventure.

The production includes a cast of seven student actors and a set design crew attempting to recreate the South Pole environment. Peggy Mead-Finizio, SVSU assistant professor of theatre, is helping the production by creating lighting effects.

“Each show has different challenges and it is the lighting designer's job to collaborate with the production team to meet these challenges,” she said. “We work hard to hang and circuit the lights, focusing them and put colored lighting gel in them to create atmosphere and spend a great deal of time recording cues into the computerized light board.”

“The challenge here is that the southern lights are not stationary and change all sorts of brilliant colors,” Mead-Finizio said. “Lighting itself is best when the audience does not even notice it.”