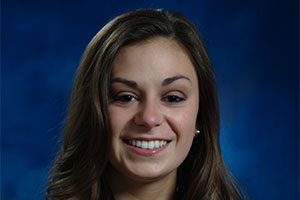 A New Lothrop native once again will join one of the world's leading Super Bowl advertising experts in analyzing the trends and consumer impact of the ad lineup planned for this year's big game.

Saginaw Valley State University student Courtney Seamon and nine of her classmates will participate in a Super Bowl ad research project with Rama Yelkur, dean of SVSU's College of Business and Management.

Yelkur's work has been published in leading scholarly journals and has been cited widely in popular media, including Advertising Age, CNN Money, The New York Times, USA Today‌, and The Wall Street Journal. Seamon, a marketing major, has collaborated with Yelkur on the research since the dean began hosting student focus groups examining the Super Bowl commercials at SVSU in 2014.

“The critical thinking behind why some commercials score well and others not so much - and if our previous theories will still apply to the changing world of Super Bowl advertising - is really what intrigues me,” Seamon said.

This year - as with the previous two years - Seamon and her classmates will watch and analyze the Super Bowl commercials on the SVSU campus when the game starts at 6:30 p.m. Sunday‌, Feb. 7.

The stakes are high this year; a 30-second commercial during this year's broadcast costs $5 million.

Yelkur's research over the years has shown there are certain “likability factors” that can predict whether an ad will appeal to viewers. Some of those factors include the presence of humor, animals, celebrities or children. The SVSU focus group will analyze the advertisements during the game, predict how consumers will react to the marketing based on those likability factors, then research consumer reaction in the weeks following the Super Bowl to track whether those factors have changed.

Seamon also plans to co-author a research paper with Yelkur, which they plan to submit for publication in a peer-reviewed academic journal. Seamon presented an earlier research paper co-authored with Yelkur at the Marketing Management Association annual conference in Chicago in March 2015‌.

Seamon already has begun preparing for Sunday‌'s focus group, analyzing the Super Bowl commercial information that has been released before the game.

“Personally, I'm always interested to see what Anheuser-Busch comes up with; especially, since they are expected to have bought 3.5 minutes of air time this year,” she said.

“They have posted several inspirational celebrity teasers online which will be interesting to see how they tie them all together,” she said. “I'm thinking it could be an encouraging, pull-at-the-heartstrings ad similar to Always' ‘Like a Girl’ 2015 commercial, which scored very well in terms of ad likability.”

Seamon will be joined in the research by fellow SVSU marketing majors Daniel Hill of Harrison, Valerie Klein of New Lothrop, and Kyle LaPine of Troy.

Courtney Seamon said participating in the Super Bowl ad research has been fulfilling, both academically and personally.

“Even after I graduate in May, and my research with Dr. Yelkur ends, I'm not sure I'll ever be able to watch a Super Bowl game without analyzing the ads,” she said.

“Personally, this experience has been life-changing because of the knowledge and advice I've received from Dr. Yelkur, not only as a mentor in marketing research, but also as a woman in business.”