SVSU students empowered to explore journeys of expression through Odyssey

‌Saginaw Valley State University has a new resource for a community of student writers creating content for Odyssey. Aiming to 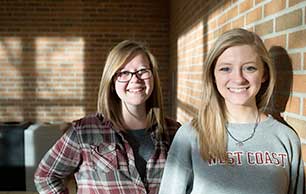 shine a spotlight on millennial voices, Odyssey gives student writers a platform to discuss what matters most to them.

Local communities of Odyssey are popping up on many collegiate campuses across the nation and many of the posts written on the platform have gone viral. The SVSU community was established back in March and has grown quickly to be among the nation’s most prolific.

Abby Engel, a communications major from Birch Run and editor-in-chief of SVSU's community of Odyssey, explained that the site is “an open platform. They don't tell you what you can and can't write. Writers have the freedom to cover any topic they choose.”

In just a few short months as editor-in-chief, Engel has taken the Odyssey community — comprised of fewer than 10 content creators when she took the reins — and turned it into a staff of more than 30 content creators that is now a registered student organization at SVSU.

Michael Nocella, who works out of Odyssey's New York City headquarters and serves as a content strategist for various local communities, including SVSU, called the university's 32-articles-per-week pace “very impressive.”

“Out of 1,200 local communities, only a handful of communities are producing that much content on a weekly basis,” he said, adding Engel has excelled in her role as editor-in-chief.

Topics range from sweetly sentimental pieces dedicated to a pet thanking them for teaching us what it means to love someone with your whole heart, to "life hacks" and tips on how to survive your freshman year of college.

Nocella explained, "Odyssey is about reflecting what people really feel, not selling more media…what you see represents nothing other than authentic ideas that the community deems important."

Miah Cooper is a secondary education major from Bay City and one of the content creators for SVSU's community of Odyssey.

“It makes my writing feel valued and I'm happy to have the opportunity to reach so many people through my writing,” Cooper said.

Cooper reached tens of thousands of people with her article titled, “This Shooting Does Not Define Our SVSU Family.” In the aftermath of a shooting in September at an off-campus apartment complex where many students reside and where Cooper was present, she took to Odyssey in order to comfort and unify her fellow Cardinals as well as parents, community members and prospective students.

“I hoped that it would reach people who needed to hear it,” she said. “I hoped it would help some people find comfort.”

Nearly 8,000 people have shared Cooper's essay on social media. Local TV and newspaper reporters interviewed her about the story. Strangers thanked her for sharing her feelings.

Upon hearing of Cooper's experience at the party that night, Engel explained that she was in full support of Cooper's decision to write the article.

In the article, Cooper wrote, “As a Cardinal, my Red Pride is unchanged...my school is my safe place. My school is not dangerous. My school is not violent, but the world is. So on this day – and every day – I stand with my Saginaw Valley State University — because we are Cardinal strong.”

But Odyssey isn't just a place for SVSU students to express their thoughts, feelings, concerns and values. It gives them a home on SVSU's campus. In an article written by Engel, titled “Thank You Odyssey for Giving Me a Home,” she addressed the online community directly.