Once — not too long ago — Dan Strasz tried to count the number of offices he has occupied while working at SVSU.

“I lost count at 17,” said the Academic Advisement Center director. “I’ve been all over the campus.”

The office he has occupied for nearly two years, on the first floor of Wickes Hall, was a library when Strasz first became part of the SVSU family as a teenage undergraduate in 1982.

Since then, he has worn a number of hats on campus, as both a student and a professional. 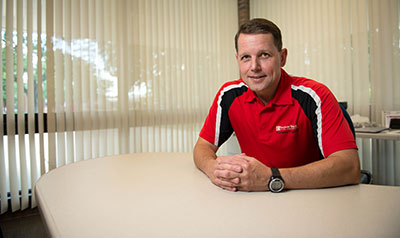 He was a player on the 1983 national championship men’s indoor track team — an accomplishment that in 2013 resulted in the team’s induction into the SVSU Cardinal Athletics Hall of Fame. He served as the student government’s president in 1985. He graduated with a bachelor’s degree in 1986.

Shortly after that, he nearly nabbed a position in the state government, but an election season fallout kept him from such a career. Instead, he applied for a position in the SVSU Admissions office. Since then, he’s taken on new roles in Career Services, First Year Programs, Orientation, and Academic Advisement.

“It’s gone by really quick,” Strasz said of his career as a Cardinal. “It’s been a great experience here. I’ve been fortunate to have had a variety of job opportunities.”

His wife, Tracy, who also graduated from SVSU, died of cancer in 2009. Since then, Strasz has been a regular at charities and fundraisers benefiting cancer research and cancer awareness.

“That’s a very important cause to me, so I try to stay connected to events like that,” he said.

He also keeps busy as a coach with the 7th and 8th grade football team at Nouvel Catholic Central Elementary School.

That commitment remains part of the reason he advanced his career at SVSU.

Strasz has remained a member of the Academic Advisement Center since 1998, his longest tenure with any of SVSU’s offices.

“What I enjoy most about this job are the challenges,” he said. “Whether it’s making processes easier, helping students who are registering, improving university processes, anytime I get an opportunity to make things better, that’s rewarding for me.”

He said his colleagues motivate him and bolster him professionally.

“It’s gone by really quick,” Strasz said of his career as a Cardinal. “I’m fortunate to have a very dedicated and hard-working staff.  It’s been a great experience here.”