Every smile has a purpose for Heidi Chernich.

After her 16-year-old son, VJ, ended his life in September 2008, Chernich’s approach to connecting with people has changed. It’s an approach that she brings to her work as administrative secretary at the Office of Academic Affairs.

“The way you treat people and the way you smile at someone can make a difference,” she said. “Sometimes just saying ‘hi’ can make that difference, especially if someone seems sad.” 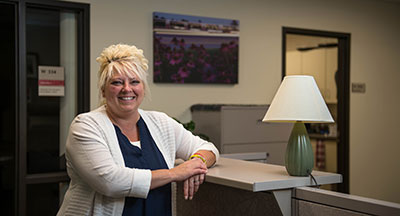 Chernich’s own struggles with despair following her son’s death led her to step away from a 25-year career as a legal assistant with the UAW. She spent four years in that state of mind before deciding to re-enter the work force by answering an advertisement seeking candidates for SVSU’s clerical pool.

She was hired, spending weeks at a time in various offices before landing a full-time position in the Office of Diversity Programs. She was hired at Academic Affairs in April 2015.

The move to SVSU helped Chernich reengage with the world, exposing her to supportive and friendly co-workers. The network she built on campus also was supportive of Chernich when she joined Walk For Hope, a Saginaw-based nonprofit organization that raises awareness about depression and suicide. A number of Chernich’s colleagues have joined in her efforts with the group.

“It’s a passion of mine,” she said of Walk For Hope’s mission. “Very close to my heart.”

The nonprofit hosts an annual fundraiser that supports educational programs aimed at training people how to approach those suffering from depression and thoughts of suicide.

“My son was the most normal 16-year-old, and I didn’t even realize he was suffering from depression,” she said. “Talking about these sort of things can be difficult, and I just want to make it easier for people to talk about these things.”

The lessons she has learned, meanwhile, have made her daily interactions more rich and meaningful, she said.

“I try to get to know everyone, including the student workers,” Chernich said.

She considers her Academic Affair co-workers “like a family.”

“They’re just a great group of people to work with,” she said.

Meanwhile, her at-home family also keeps Chernich smiling. With her husband of 30 years, Vince, Chernich raised five children, including two who still live at home. Chernich said a new addition to that family tree — a 4-year-old grandson — has given her another purpose for smiling.

“He and I share a really special bond,” Chernich said. “We had a connection right from the beginning, and he makes everything worthwhile. He makes me smile every time.”