By Bruce Zimmerman’s calculation, SVSU extended his coaching career by a decade.

“Sixty years old,” he said. “That’s when I told my wife I would be ready to retire. Then I heard about this opportunity.”

“It seemed like all of the pieces of the puzzle were here to create something special,” said Zimmerman, whose new target retirement age is 70. 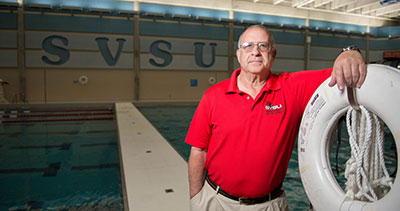 Even while he was an active competitor, though, Zimmerman’s ambitions were to become a coach one day.

Zimmerman can mark the beginning of his coaching career to the day: Nov. 7, 1975.

“That was a scary date,” he said. “I remember walking out to the pool deck. I started to go through the new team policies, and one of the older guys didn’t like what he was hearing, so he left.”

He began by coaching both the boys team in Peoria High School and the Peoria Park District USS Age Group Swim Team in Illinois. His career included jobs at various K-12 schools, clubs and colleges across the Midwest and east coast.

His first college coaching stint came in 1988 with a women’s team affiliated with the University of South Carolina. When the men’s team’s coach departed for the storied men’s swimming program at Indiana University — which produced Olympic champions such as Mark Spitz — Zimmerman followed to become an assistant coach in 1990. In 1999, he accepted a head coach position at the College of Charleston, where he remained until he decided to postpone his retirement and join SVSU.

“Our teams have exceeded my expectations substantially,” he said of SVSU’s programs. For instance, four student-athletes from SVSU’s women’s team qualified for the NCAA Championships during the program’s first two years. Two student-athletes from the men’s team qualified for the championships during the program’s first and only year of competition.

Zimmerman relishes the opportunity to impact players’ lives inside and outside of the pool.

“There’s nothing more satisfying than when a former swimmer calls me up to tell me how something I taught them paid off in life,” he said. “That’s what keeps me motivated.”