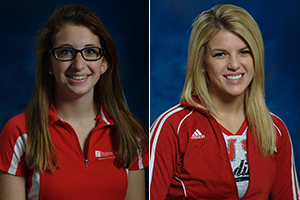 Rivard also received the prestigious and highly competitive Outstanding Community Impact Award, which honors up to five undergraduate students in Michigan who have made service an integral part of their college experience by their significant contribution to community resources. There are 37 colleges and universities who are members of Michigan Campus Compact.

An elementary education and early childhood major from Bay City, Rivard has been involved with several service projects and community engagement activities. She has spearheaded initiatives with a number of local agencies including Special Olympics, food pantries, and local schools.

Within SVSU, Rivard is a founding member of the university's chapter of Lions Club, a service club; she also is a Kantzler Fellow, part of a select group of Bay County students that participate in community engagement initiatives to improve the Bay Area. Rivard is an inducted member of the National Society of Leadership and Success, a member of Alpha Sigma Alpha sorority, and a host of other organizations.

Rivard also has volunteered for multiple Alternative Breaks trips, performing community service in places such as Grand Rapids and Nashville, Tennessee. Active in scholarship pageants, she was crowned Miss Bay County in 2015 and is the current Miss Saginaw County.

Schneider, a business management major from Saginaw Township, has a passion for improving her campus and community. She coordinated SVSU's Battle of the Valleys fundraising competition in 2015, collecting more than $24,500 in one week for Get Outside For A Healthy Inside, an affiliate of the Saginaw Community Foundation dedicated to increase physical activity in Saginaw, focusing specifically on building parks and maintaining trails.

SVSU received an Innovations in Community Impact award from Michigan Campus Compact for Battle of the Valleys at the same ceremony. This is the first year for the award.

Schneider serves as the philanthropy chair for SVSU’s student government and is a Wolohan Fellow, part of a select group of Saginaw County students working to improve the image and quality of life for their hometown.