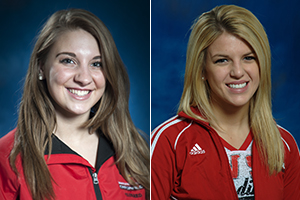 Mallory Rivard, an elementary education major from Bay City, and Mikaela Ashton, a management major from Grayling, were each given scholarships from the American Association of University Women (AAUW) and the AAUW Midland Branch to attend the National Conference for College Women Student Leaders.  The conference will be held at the University of Maryland  June 2-4.

Both recipients earned the awards with strong academic and volunteer backgrounds.

Rivard has served as a program director for the Youth Volunteer Corps of Bay City, the SVSU Dean's List and the Foundation Scholars Program. She has also been a member of National Society of Leadership and Success and the SVSU Lions Club, and as the current Miss Saginaw County 2016.

Like Rivard, Ashton has had numerous work experiences that have honed her desire to excel in leadership roles.  In addition, she is a member of Alpha Phi Omega, a local service fraternity that focuses on projects in Saginaw, Bay City and the SVSU campus.

The National Conference for College Women Student Leaders, attended by more than 1,000 young women, will offer the opportunity to be inspired by women in leadership roles, to honor Women of Distinction, to attend workshops offering leadership skills, to network with young women from across the country, and to explore Washington, D.C.

AAUW advances equity for women and girls through advocacy, education, philanthropy and research.  There are AAUW branches in Midland, Saginaw, and Bay City.

Two students from Central Michigan University, Delta College, Northwood University or SVSU are awarded with the scholarships from AAUW each year.