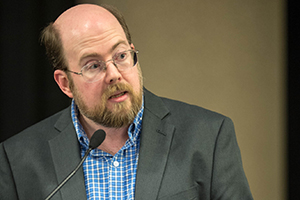 A Saginaw Valley State University English professor will grace a stage that has spotlighted scholars prominent in literary studies and history such as David S. Reynolds, Carla Peterson and Henry Louis Gates, Jr.

He will share how studying the lives of black Americans in the 19th century should reshape consideration of black writers, editors, and readers then and now.

Gardner plans to discuss diverse print material produced by and for the African Methodist Episcopal Church between 1840 and 1870. In his talk, titled “Re-envisioning Black ‘Book History’: The Case of AME Church Print,” Gardner will reference a similar pool of research that provided the basis for his Black History Month lecture hosted by SVSU in February.

The American Antiquarian Society is the preeminent independent research library focusing on American history, literature and culture through 1876. The annual Wiggins Lecture is named for the late James Russell Wiggins, former editor of The Washington Post and a former U.S. ambassador to the United Nations in 1968.

Gardner, who received his Ph.D. from the University of Illinois at Urbana-Champaign, joined SVSU’s faculty in 1996. He served as chair of the Department of English from 2006 to 2010 and as associate dean of the College of Arts and Behavioral Sciences from 2013 to 2015. Gardner returned to the faculty in 2015.